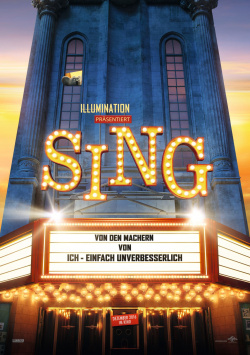 The theatre is his pride and joy. That's because Koala Buster Moon (voiced by Daniel Hartwich) fulfilled his very big dream years ago by taking over the reins of the venerable house. Unfortunately, his own musical productions were not a great success, which is why the theater is now facing ruin. Buster sees only one way out: with a big casting show he wants to get back to the top and save his dream. So he scrapes together every cent he has for prize money. It's just too bad that his assistant, who's not quite as fresh as she used to be, puts a few too many zeros on the advertising slips. And so the next day, a long line forms outside the theater with plenty more and even more less talented animals. A pig housewife, a gangster gorilla, an arrogant mouse and even a rocking porcupine lady make it into the show. But actually getting them on stage proves to be much more difficult than anticipated.

Singing and dancing animals have actually always existed in animated films. But it was the Shrek movies, in particular, that made it a (un)nice tradition for the finale of modern computer animated movies to have the mostly animal characters singing and dancing along merrily to a snappy pop song. Sing is sort of the long version of these much-loved finale sequences, bloated with a rudimentary plot. No question about it: the story has some very nice moments and a lot of potential. Because the casting mania, which has diminished a bit but is still far too present in our media, offers an incredible amount of fodder for a biting satire. That this could nevertheless also be suitable for children is proven by films like I - Simply Incorrigible, which hides its satirical aspects in small allusions that adults can laugh heartily at, while children have fun with the cute characters and their turbulent goings-on.

But unfortunately Sing doesn't exploit this potential at all. Instead, the story is so conventional and predictable that the film ends up being quite nice to look at, but has no unique selling point whatsoever. Comparing it to the vastly more imaginative, witty and enigmatic world of 2016's animated hit Zoomania may be unfair, but it makes it painfully clear what Sing lacks, and not just in story. Originality is seemingly a foreign word to the creators, which is a real shame. Because there are definitely moments where it becomes clear how many possibilities have been left untapped here.

Now a word about the dubbing, which follows a really unattractive trend that can be seen more and more often especially in animated films. In order to be able to do promotion on TV shows or YouTube videos, more and more TV stars, casting show participants or even YouTubers are hired to lend their voices to the characters. The result is okay at best, but doesn't compare to when real actors or - as is the ideal case - skilled voice actors are used. Such is the case here. Instead of Matthew McConaughey in the original, the German version features RTL presenter Daniel Hartwich, and instead of Scarlett Johansson we hear Silbermond singer Stefanie Kloß. The fact that these voice actors usually get paid many times what a professional voice actor earns is really more than annoying. Even though many viewers won't be bothered by this, it just has to be said.

Sing offers, despite all justified criticism, decent entertainment with many great songs - which are, of course, only cover versions and no original compositions. If you want to see singing and dancing animals and some nice gags, you can't miss this movie. Despite many wry notes at the end yet: Worth seeing!