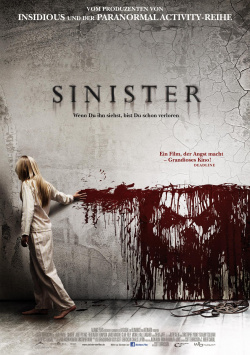 Writer Ellison Oswalt (Ethan Hawke) specializes in writing true crime books. But his last success was years ago. Since then, he's been desperate to find the right material for a new bestseller. In a small town in Pennsylvania, he seems to have found the perfect crime: a still unsolved massacre of a family and the mysterious disappearance of their daughter. Without telling his wife, Ellison rents the murdered woman's house and moves in with his family. But before the first boxes are unpacked, the first problems arise: the local sheriff finds Ellison's inquiries into the house distasteful, Ellison's wife Tracy (Juliet Rylance) is annoyed by the constant moves and opens up to him that this is his last chance, and his children Trevor (Michael Hall D&acute;Addario) and Ashley (Clare Foley) also have a hard time coming to terms with their new home. But all that is harmless compared to the nightmare that begins for the writer and his family when Ellison finds a box of old Super 8 films in the attic. Because what's on those films quickly brings Ellison to the brink of insanity. But with a new bestseller at his fingertips, he just can't stop delving deeper into the grisly tale.

Early with his feature debut The Exorcism of Emily Rose, director Scott Derrickson proved his knack for effective creepy cinema. After more or less squandering his talent on the sci-fi remake of The Day the Earth Stood Still, he now turns his attention back to the horror genre with Sinister. His latest work does not stand out for its originality and great acting. In addition, Derrickson uses some common genre clichés, about which one can only wonder as a normal thinking person again and again. Why someone who is convinced that someone or something is in his house does not simply use the light switch to see better, but instead creeps full of fear through the gloomy rooms?

But despite the clichés and the not always logical behavior of the actors Sinister has become a good and especially really scary horror film, which is particularly effective as long as Derrickson refrains from the use of computer-generated effects. The videos Ellison finds in the box in his attic are genuinely unsettling and the purposefully used shock effects rarely fail to deliver. It's only towards the end, when it's shown who's responsible for the creepy goings-on, that the film loses much of its effectiveness. Here it becomes clear once again that creaking doors or simple shadows and a good sound design can be much scarier than ghosts from a computer.

The fact that no sallow aftertaste remains at the end is due to the good and, in its own way, relentlessly consistent finale. The way in which Derrickson, who is also responsible for the screenplay, lets the story end, makes up for some of the weak points and should put a satisfied smile on the face of many a genre fan. In the end, Sinister can convince with a good mix of classic creepiness and bloody horror, with a coherent atmosphere, a good lead actor and its effective ending. Not a genre masterpiece, but definitely above average scary fare. Worth seeing