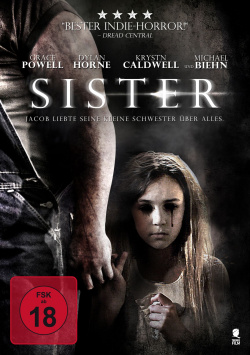 Contents: Many believe it's just a legend that the ghost of Jacob (Dylan Horne) haunts the old house on the outskirts of town. But policeman Billy (Larry Wade Carrell) knows the truth. He witnessed the cruel story himself, his twin brother Otis (also Larry Wade Carrell) was directly involved in the events. Otis was involved with Edith (Krystn Caldwell). From her earlier marriage with Lawrence Kell (Michael Biehn), who one day lost his mind and became a killer, Edith brought the mentally retarded Jacob into the relationship. For him there is only one thing: his little sister Sissy (Grace Powell). The girl is also the only one who can reassure Jacob when he threatens to attack Otis after he has once again raised his hand against Edith in booze. The whole city knows that the situation with this family will not go well for long. But nobody can imagine what a horrible end the story will come to...

"Sister" takes place on three time levels: police officer Billy remembers the events of 1979 in the present, in the course of which the story about Lawrence Kell, which took place several years earlier, is again dealt with. But this nested narrative style is the most complex part of a more conventional story, the staging of which can never really hide its small budget. The gore effects, which are used towards the end, the make-up, with director Larry Wade Carrell being trimmed to old and the somewhat wooden actors - all of this almost screams out that this horror drama is a flawless B-movie.

Nevertheless Carrell manages very well to get the best out of the means at his disposal. Even though the dialogues are really underground at times and the staging seems a bit amateurish, the story is told in a thrilling way. The dirty atmosphere is just as oppressive as the insanity that befalls both Michael Banhn's character Lawrence Kell and the brutal Otis. Without a glimmer of hope for a better future, Edith and her children are drawn into a spiral of violence that can only end in disaster. Carrell enriches the gloomy mood resulting from this situation with a little humor and in one scene even with a psychedelic-looking sequence, which creates a thoroughly stirring overall picture.

One should have a soft spot for dirty B-movies with a slight grindhouse touch, in order to be able to enjoy "Sister". But if you like such movies and don't always take the whole thing too seriously, you will certainly be able to overlook some budget-related weaknesses. And in this case there is also - with small restrictions - a satisfied one: Worth seeing!

Picture + sound: The picture shows slightly excessive contrasts, which reveal a few minor blurring in the darker sequences. The colour scheme is sometimes strongly alienated, giving the film its very special look. For a film with a quite low budget of less than 1 million dollars this is perfectly ok. This also applies to the rather unspectacular tone, which is primarily determined by the dialogues. The ambient noises are mixed very discreetly and also the isolated sound effects seem a bit dull. But since in most scenes the dialogues set the tone anyway, the bottom line is that it's just enough for a "good"!

Extras: In addition to the trailer for the film and other program tips from the provider, the DVD also has an (unfortunately not subtitled) audio commentary by director Larry Wade Carrell and producer Stacy Davidson. The conversation between the two men is very entertaining and informative, but here and there it is also a bit difficult to understand, which is why subtitles would have been desirable.

Conclusion: "Sister" is a neat horror thriller, which can't deny its B-movie character in any second, but whose story and gore effects are convincing enough to satisfy friends of low budget genre movies. The DVD is technically well done. As a bonus there is only one audio comment, which is worth listening to despite missing subtitles