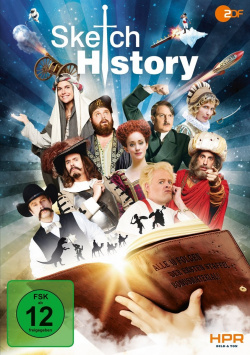 Content: Forget everything you learned in history class. Because the truth was, everything was different. The ten-part first season of "Sketch History" shows what the Knights of the Round Table really discussed, how the search for a hostel for Joseph and the highly pregnant Mary actually took place, and what the real reason was for the mutiny at the Bounty. The series also reveals what such an internship in the Middle Ages looked like - for example with a hangman - and where you can find Klaus Kinski's ancestors everywhere in history. In addition, the series clears up prejudices about Vikings who are supposedly so hard-drinking, exposes Goebbels as a failed joketeller and finally reveals how US President Kennedy came to say his legendary sentence "I am a Berliner".

As so often with Sketch comedy series not every gag ignites. Some scenes are relatively weak and lack the malicious bite that makes other moments so funny. The fact that some gags are repeated all the time also contributes to the fact that the later episodes don't seem as funny as the great first episode. But all in all, the well done sketches outweigh the good actors, the funny scripts and the sometimes quite enigmatic humor. The series also shows that the actors had a lot of fun and the makers were behind the scenes with a lot of passion and attention to detail. Despite some hiccups and weaknesses this all leaves a positive overall impression, for which there is a very clear "Absolutely worth seeing" at the end. History lessons are a lot of fun!

Picture + sound: Picture and sound on the DVD are at a good level for a TV comedy series. The image is clean, the colours are harmonious and the sharpness is absolutely satisfactory. And even the stereo sound is perfectly sufficient for a sitcom. This is of course not an audiovisual revelation, but it fulfils its purpose in every respect. And for that there is also a clear one: Good!

Extras: As a bonus on the first disc there are 6 minutes of sometimes more, sometimes less amusing outtakes to see. The DVD also includes a booklet with information about the actors.

Fazit: "Sketch History" is an amusing history lesson that gives viewers a whole new perspective on the great historical events. If you ever wanted to know how the mutiny at the Bounty really took place or where Klaus Kinski's ancestors romped about, you've come to the right place. The double DVD presents all ten episodes of the first season in good picture and sound quality. The six-minute bonus material is quite amusing, but nothing more than that. Altogether there is a clear one for this DVD: Recommended!