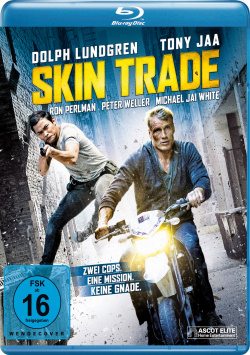 Content: New York cop Nick Cassidy (Dolph Lundgren) has got himself in a fight with the wrong opponent: when he gets in the way of the trafficker Viktor Dragovic (Ron Pearlman) and kills one of his four sons on a mission, Dragovic swears bloody revenge: he wants the cop and his family dead. But only Cassidy's wife and daughter die in the attack, and he barely survives. Now it is he who, driven by revenge, plans a merciless retaliatory strike against Dragovic and his organization. This leads him to Bangkok, where he immediately falls into a trap. Now the ambitious detective Tony Vitayakul (Tony Jaa) believes that Cassidy has shot his partner. Only with some effort Nick manages to convince him that he is innocent and that Tony joins his mission. But then the revenge campaign takes an unexpected turn...

With "Skin Trade" director Ekachai Uekrongtham has at first glance only staged another action vehicle for an aging 80s star who wants to swim on the wave of success of the "Expendables" movies. As a viewer, you don't really expect much - and are positively surprised. This begins with the visual implementation. The movie doesn't look like cheap video store food from the '80s. Instead, Uekrongtham has created a very appealing look that can easily keep up with current cinema productions of the genre in its best moments. Especially the big chase through Bangkok is first classly staged and choreographed. Moments like this also console us over some dramaturgical and acting weaknesses.

Dolph Lundgren's play is more than wooden. Meanwhile, he also seems to be very cumbersome in the action scenes. However, Uekrongtham knows very well how to put him in the limelight in a way that only marginally makes a negative impression. Co-Star Tony Jaa ("Ong-bak", "Fast & Furious 7") also isn't a masterly actor, but delivers first class martial arts as usual, with which he creates some really great action moments. The well orchestrated duels in connection with explosive stunts and a harmonious tempo make some involuntarily funny dialogues quickly forgotten.

"Skin Trade" is not a great art cinema and also not a particularly original contribution to action cinema. But the movie delivers to its viewers exactly what you can expect from an old-school Revenge thriller. If you place a lot of value on sophisticated dialogues and multi-faceted drawn characters, then this is surely the wrong movie for you. However, if you want to be entertained with a simple, yet exciting story, an appealing look and fast-paced action, you will definitely get your money's worth. Worth seeing!

Extras: As a bonus the Blu-ray has some promo interviews with cast and crew as well as the trailer and some uncommented B-Roll recordings (about 26 min.) from the shooting.

Conclusion: "Skin Trade" is a solid action thriller, which comforts with appealing optics and proper action inserts over the wooden play of Dolph Lundgren and over some involuntarily funny dialogue sequences away. Especially the scenes set in Bangkok are full of tempo and suspense, which is why an entertaining home video evening is guaranteed for all lovers of action films of the old school. The Blu-ray is technically well to very well implemented. The bonus material is a decent standard and at least offers a small insight into the production. Altogether there is a clear one for this disc: Recommended!