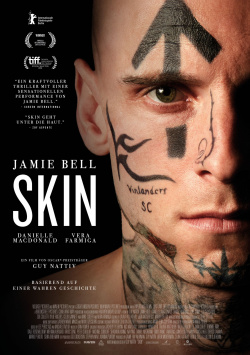 That Bryon Widner (Jamie Bell) is a person full of hate and prejudice is immediately apparent from the young man. After all, he wears his racist sentiments openly in numerous tattoos on his body and face. For the display of his hatred and his acts of violence, he is celebrated in the radical right-wing group by his foster parents

Ma Shareen (Vera Farmiga) and Pa Fred Krager (Bill Kamp). Doubts about his thoughts and actions only arise in him when he meets mother of three Julie (Danielle Macdonald) for the first time feeling something like genuine love and familial warmth. Realizing that the feelings could be dangerous not only to him, but to Julie and her daughters, Byron seeks help from African-American human rights activist Daryle (Mike Colter), who wants to help him get out of the scene and get rid of his telltale tattoos. For Byron, that means a protracted and very painful battle against the demons of the past that aren't willing to just let him go.

Skin is based on true events, from which director Guy Nattiv has made a gripping but also surprisingly restrained drama. Unlike, say, American History X, it also eschews overly explicit depictions of violence. Much is hinted at and made clear through language and atmosphere. This makes for some very intense moments, but also for numerous scenes that seem a little tough and at the same time somewhat powerless. However, this is more down to the staging rather than the great actors who give themselves fully to the very difficult roles. Jamie Bell in particular delivers a very intense performance, but Danielle Macdonald and Mike Colter also act very strongly. And Vera Farmiga makes you feel really uncomfortable as a viewer in many a moment. Respect for that!

The character of Daryle is especially interesting, a man who is confronted with hate, prejudice and violence day after day, but who never gives up hope that he can still convert people like Byron. He believes in the good in people and is willing to face their darker sides in order to do so - a very strong and important character trait that is becoming less and less common, especially in our society. The film shows very well how tightly the radical right-wing web is woven around Byron, how difficult it is to escape it and how important dedicated, courageous people like Daryle are for this.

But in the end, of course, it is Byron who has to take the hard road if he wants to escape his past. The film succeeds very well in tracing that, despite a few minor lengths at the end. Skin is not an easy film, not light entertainment to switch off to after a hard day. But it is an important drama that shows how important it is to reach out to people and believe in them, even if their attitude contradicts everything you believe in yourself. For the great actors and the important message there is then also a deserved: Worth seeing!