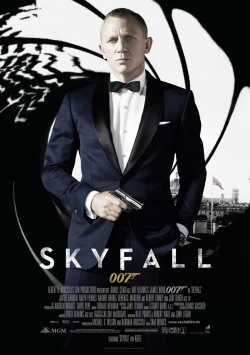 Four long years James Bond fans had to wait for a new adventure of their screen hero. The bankruptcy of the studio MGM, the financially uncertain future due to delays in the sale and the simultaneously skyrocketing budget of the 23rd Bond film made for this long wait, but it also had its good. For not only that the film is now in theaters in time for the secret agent's 50th birthday. Director Sam Mendes (American Beauty) also had enough time to polish his Bond film to perfection. After the sometimes harsh criticism Marc Forster took for Quantum of Solace, this was truly a godsend for Mendes. After the first screenings of Daniel Craig's third outing as 007, the opinions as to whether the long wait was worth it were quite unanimous and were quite clearly: Yes! So the expectations were driven up even higher and as a fan I asked myself if Skyfall could live up to the hype. After almost two and a half hours I can claim for myself: I haven't been so well entertained by James Bond in a long time.

The reason for this is also due to the fact that I didn't know very much about the plot beforehand. Sure, the trailers were watched multiple times, you followed some rumors, but still essential building blocks of the film's story remained unknown. So that you can be similarly entertained by this film and in places also surprised, I'll keep the synopsis as short as possible. Therefore only this much: after a hard disk was stolen, on which the true identities of all undercover agents are contained, James Bond (Daniel Craig) has only little time to get the hard disk back before it can be decrypted. But the mission in Istanbul goes dramatically wrong and Bond falls to his presumed death on a train during a duel with terrorist Patrice (Ola Rapace). But while M (Judi Dench) is working on an obituary for her best man, a whole new set of problems is already coming her way: for one, the new chairman of the Espionage and Security Affairs Committee, Mallory (Ralph Fiennes), is questioning M's competence and wants her to retire soon. And then there's also an attack on MI6 headquarters that leaves numerous staff members dead. This attack calls Bond, who had completely retreated after his death, back into the realm of the living. He knows he is the only one left to put a stop to the mysterious villain Silva (Javier Bardem), who is behind the hard drive theft and the attack on MI6. But he has no idea that there is a connection between him and the genius villain that makes Silva more than a match for him.

Even though the first two Bond films with Daniel Craig were very successful and especially Casino Royale was well received by fans and critics, voices were raised again and again criticizing that the films would lack the typical Bond flair, that the humor would come too short and that the action would be too much oriented to action smashers like the Bourne films. The producers promised to take this criticism to heart and make Skyfall feel more like a classic Bond again. This is not entirely successful. True, there are many set pieces that a true 007 film should not be without, from the shaken rather than stirred martini to the Walther PPK to the Aston Martin, beautiful women and exotic locations. Skyfall has all of that. There is also a lot of humor and a few nice surprises, which will not be revealed here.

And yet Sam Mendes has not made a Bond in the classic sense. The story is far too intimate for that. It's a journey into the past not only for Bond, but for M as well, as they face painful memories. In the process, the audience gets to see sides of James Bond that are a real novelty in this form, making it downright impossible to achieve the lightness that, say, the films with Roger Moore held.

However, the film not only addresses Bond's past, but also his future. The question whether he is only a relic, whether his style is not long antiquated and he, like M, actually belongs on the siding long ago, is dealt with in a great way. The film proves a lot of self-mockery, but at the same time it also takes a good shot at all those who have repeatedly declared James Bond as a franchise dead and are convinced that, despite all the modernization, a series that is still very original at its core can still hold its own in an age of high-tech action heroes. At the latest after Skyfall it should be clear to the last doubters that James Bond still doesn't belong in retirement after fifty years and is good for perfect cinema entertainment even with small blemishes.

The script perfectly manages to enrich the very personal story with great action sequences, fascinating locations like Silva's base on a deserted island and interesting characters. Besides the new Q (Ben Whishaw), who takes on a very difficult legacy here but masters his debut brilliantly, and a very well acting Ralph Fiennes, Javier Bardem of course leaves the biggest impression. It almost seems like Bardem always gives the best performances when he gets to play villains with particularly nasty haircuts. While his blonde matte here isn't quite as kinky as his killer frieze from No Country for Old Men, his hair isn't really attractive here either. But it's perfect for Silva, who makes a very interesting adversary for Bond precisely because his motives lie somewhere quite different from the otherwise popular quest for world domination. And the ingeniously planned implementation of his plans, carried out with a mixture of creepy politeness and ice-cold calculation, is also given an extreme intensity by Bardem's great acting. No question, this villain will go down in Bond history.

Adeles song Skyfall, presented in a great title sequence, the extremely fast-paced and suspensefully staged entrance scene, the quieter moments between Bond and M, a smart Daniel Craig, a B&eacute;r&eacute;nice Marlohe, great sets and a high level of suspense make the 23. (Official) Bond film quite great entertainment cinema until the last third. The last third, however, might be the point where opinions part ways a bit. Here, Mendes slows down the action, at least for a moment, puts James Bond the man in the foreground, and also presents the action in a setting that is a complete contrast to the crowded London in which much of the film is set. For me, it was this final third that gave the film its very special feel. Not only does it reveal a glimpse into Bond's life that may also be new to many fans. It also gives the film a depth that just predecessors like Quantum of Solace or Die Another Day lacked. By making it so personal here, the actual showdown takes on considerably more tension and emotional power, which really keeps the viewer glued to the cinema seat.

Whether Skyfall really is one of the best Bond films ever, only time will tell. Perhaps the first impression is only so positive because the wait has been so long and the predecessor, despite its entertainment value, has been somewhat disappointing. But even if the first impression was overly positive due to too much euphoria, that doesn't change the fact that Sam Mendes has not only made a really good, amazingly multi-layered action thriller with interesting characters, but also a great, entertaining, exciting, visually polished and well-acted Bond film, after which one is really happy about the obligatory announcement in the credits James Bond will return! And therefore applies then also - what a surprise: Absolutely worth seeing!!!