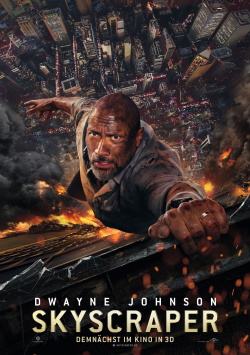 War veteran and former FBI operations chief Will Sawyer (Dwayne Johnson) seems to have found a real dream job in Hong Kong. He is to inspect the brand new security system of The Pearl, the tallest skyscraper in the world. He, his wife Sarah (Neve Campbell) and their two children are the first residents of the 240-story building. But no sooner has Will taken up his duties than disaster strikes: A fire breaks out on the 96th floor, trapping his family as well. The whole thing is no accident, but the work of terrorists who make everything look like Will is the arsonist. A battle against time begins where Will must not only save his family, but also put a stop to the bad guys and restore his reputation.

Skyscraper is, at least dramaturgically, a disaster movie in the truest sense of the word. For the script, which is bursting with clichés and atrocious dialogue, cannot be described as anything other than disastrous. The characters are so incredibly one-dimensional and stereotypical that you almost can't believe the whole thing is meant to be serious. It's as unsubtle as it is self-deprecating - and thus squanders any chance of even coming close to the obvious role models like Blazing Inferno or Die Hard.

This, of course, also dulls the overall enjoyment, which can still be called solid despite the grotty script. The quite obviously tailored to the very lucrative Asian cinema market action cracker looks really really good in some moments. For instance, when Will balances over a crane towards the burning skyscraper or rappels out of a window at dizzying heights (where, oddly enough, there hardly seems to be a breath of air), the whole thing is very effective, especially in 3D.

Skyscraper is, precisely because of its visuals, a film you wish was better than it ultimately is. Because in the long run, solid action and gripping effects just aren't enough to console over a poor script and hokey story. Who likes Dwayne Johnson in his I have to save my family mode and who likes to reduce his brain activity to the most necessary in the cinema, could have a lot of fun here. For everyone else: Better buy a ticket for a better genre movie. Only conditionally worth seeing!

Cinema trailer for the movie "Skyscraper (USA 2018)"
Loading the player ...