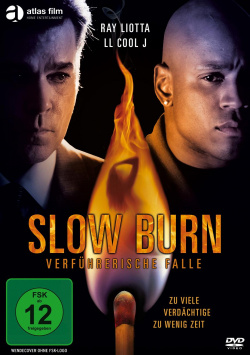 Film: District Attorney Ford Cole (Ray Liotta) is about to apply for the office of Mayor. In order to polish up his image, he is accompanied by the renowned reporter Ty Trippin (Chiwetel Ejiofor) for a reportage. But now of all times something happens where Cole can't even use the press near him: his assistant Nora Timmer (Jolene Blalock) has shot a man - allegedly in self-defense. Nora claims Isaac Duperde (Mekhi Phifer) tried to rape her. All the evidence suggests Nora's testimony. But then the shady Luther Pinks (LL Cool J) shows up and claims that Nora and Isaac had been a couple for months and she had dragged him into shady business. The longer Cole Pinks and Nora are interrogated, the more he doubts the story of his assistant. And since the notorious gangster boss Danny Luton, whom the prosecutor wants to take down, seems to have his fingers in the game, Cole doesn't let up. He has to solve this case as fast as possible - no matter what the cost...

"Slow Burn" reminds of the award-winning thriller "The usual suspects". If there stands the infamous Keyser Söze, whose identity remains hidden until the end, like a threatening shadow over everything, this is the mysterious and overpowering gangster boss Danny Luton. If you know Barry Singer's award-winning movie, you won't be surprised when Danny Luton finally reveals himself at the end. Until then, "Slow Burn" delivers solid crime thriller entertainment, whereby the whole thing always remains on the level of good TV movies.

With Ray Liotta, Chiwetel Ejiofor or LL Cool J the movie is well cast, but the script doesn't give the actors much opportunity to fully play their acting skills. Director and author Wayne Beach relies too much on well-known set pieces of the genre and tries to give the whole thing a depth of content with discussions about racism and corruption, which the movie can never really play out in the end. The obvious weaknesses should then be covered up with a pinch of eroticism, which, however, is only partially successful.

So "Slow Burn" always stays on a good level, but even with its many twists towards the end it can never grow beyond it. Whoever is satisfied with that will be well entertained here. But if you prefer to be entertained at a higher voltage level, you will hardly be caught by this "seductive trap".

Picture + sound: As only a data-reduced press sample was available for the test, the picture and sound quality of the DVD cannot be judged here.

Extras: Except for the original trailer and a trailer show of the provider there is unfortunately no further bonus material on the DVD.

Result: "Slow Burn" is a solid thriller that looks a bit like the little brother of "The usual suspects" without ever reaching its class. The cast and the quite well-structured suspense curve make sure that all the viewers who like properly staged US thrillers can take a look here.