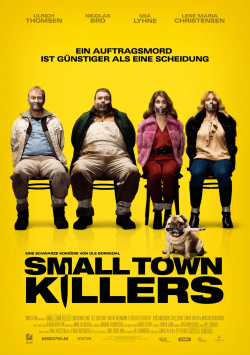 Professionally, things are going very well for the two craftsmen Edward (Ulrich Thomsen) and Ib (Nicolas Bro), but their marriages have long since run out of steam. A divorce would make the friends poor, however, Ingrid (Lene Marie Christensen) and Gritt (Mia Lyhne) know about the black money that the men have accumulated over the past years. Only one thing can help: A Russian hitman (Marcin Dorocinski) should get rid of the unloved wives. Too bad that Ingrid and Gritt get wind of it and hire a British hit woman (Gwen Taylor). That soon gives small-town cop Heinz (S&oslash;ren Malling) plenty to do.

Ole Bornedal, director of the classic thriller Nightwatch, delivers a black comedy of the more politically incorrect variety with Small Town Killers. It's never particularly subtle or cryptic, but it's usually really funny. The gags work especially well when they are really nasty. Fortunately, this is the case quite often, especially in the second half of the movie. But even at the beginning this marriage crisis of the bloody kind can be deliciously amusing just because of the actors. Nicolas Bro and Ulrich Thomsen stumble with delightfully dorky facial expressions from one faux pas into the next, while Lene Marie Christensen and Mia Lyhne are at their best as frustrated spouses.

Sure, the whole thing is unrestrainedly overdone and in places also a bit too silly and chaotic. Friends of the fine-spiritual humor will probably hardly be able to make friends with it. But when the corpses pile up around the two couples and when a friendly British granny is responsible for it, it's a lot of fun. Anyway, the character of the British hitwoman is one of the best ideas of the film, which easily consoles over other, somewhat plainer gags.

Although one rarely really laughs out loud here, Small Town Killers leaves a broad grin on the faces of the audience after a few moments, which then doesn't disappear until the end. A wonderfully wicked comedy that makes a good mood and therefore deserves a clear "worth seeing"!