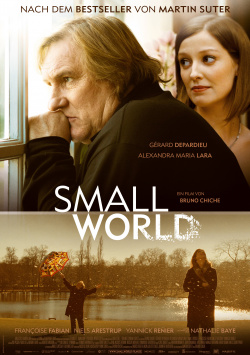 After the film adaptation of his novel "Lila, Lila" and his original screenplay "Giulias Verschwinden", another film based on an original by Martin Suter is now coming to theaters with "Small World". And not least thanks to the great leading actor, the German-French co-production is an all-round success.

The film adaptation of Suter's first novel tells the story of Konrad (Gérard Depardieu), who suffers from dementia and causes a major disruption in the lives of the industrialist Senn family when he barges uninvited into the wedding celebrations of the family heir Philippe (Yannick Renier) with the young Simone (Alexandra Maria Lara). Konrad used to be best friends with Philippe's father Thomas (Niels Arestrup). In recent years, he has taken care of Senn's vacation villa. But it has now fallen victim to destructive flames as a result of Konrad's illness. Reluctantly, the head of the family Elvira (Francoise Fabian) takes Konrad in. But she and Thomas become increasingly concerned as Konrad remembers more and more events from his childhood on the estate. And while almost the entire Senn family shuns the houseguest, Simone befriends the aging man - and discovers that she has married into a family that seems to be rich not only in money but also in secrets...

No question, "Small World" thrives on Gérard Depardieu's wonderful performance. The way the actor portrays Konrad, a dementia sufferer, with sometimes smaller, sometimes larger gestures and changes in facial expressions, is simply magnificent. It's hard not to get goosebumps at this performance, and especially at the last look on Konrad's face. You want to laugh with Konrad, cry for him, or just give him a big hug. A moving performance that deserves fullest respect.

The rest of the cast, all very well cast, naturally pale a bit alongside such a great Depardieu, even if his colleagues are European greats like Francoise Fabian, Niels Arestrup or Nathalie Baye. But even if it is Depardieu's performance that stays in the viewer's mind at the end, it also draws its strength from the interaction with the other actors. And if they weren't convincing, even Gérard Depardieu would be powerless against them.

The wonderful acting performances are embedded in a suspenseful family story, which presents itself as a mixture of drama and thriller with a slight Hitchcock flair. Again and again, director Bruno Chiche succeeds in building up a suspenseful atmosphere, by which you as a viewer will be captivated even if you know the novel or guess the resolution of the story early on.

A cinematography that can only be described as noble, great actors and an exciting and engaging story, all this makes "Small World" a more than successful, moving and in every respect worth seeing novel adaptation that lovers of European arthouse cinema should definitely not miss. Absolutely recommendable!