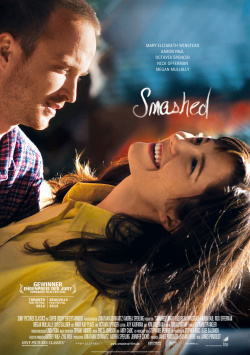 Kate (Mary Elizabeth Winstead) and Charlie (Aaron Paul) have a fairly harmonious marriage, with the young couple particularly bonded by their love of partying and drinking. That Kate might have a drinking problem doesn't occur to the cheerful elementary school teacher. It's not until she throws up in front of her shocked students after another night of drinking, and then gets caught in the lie that she's pregnant, that she has to admit to herself that something is wrong in her life. With the help of her colleague Dave (Nick Offerman), Kate decides to join Alcoholics Anonymous. Charlie accepts his wife's decision, but doesn't even think about changing his own lifestyle. But the longer Kate is abstinent and seems to have her life under control, the more problems she has successfully suppressed with the help of alcohol reveal themselves. And in addition to her relationship with her mother, she suddenly has to question her marriage to Charlie.

After an alcoholic was at the center of the story in his first feature film Off the Back, director James Ponsoldt once again devotes his second feature film Smashed to the inherently very difficult subject of addiction. His intention is to show that even a subject like alcoholism can be handled with a certain lightness, as long as the production is based on respect and honesty. This can certainly be said of Ponsoldt's direction. With a sensitive hand, the filmmaker tries not to trivialize the problems that alcoholism brings, but also to work a little humor and engaging warmth into the story at the appropriate moments. This is aided by the very good acting of Mary Elizabeth Winstead, though Breaking Bad star Aaron Paul pales a bit next to her.

The problem with the film, shot in just 19 days for a mere $500,000, is not the director's good intentions or the acting of the cast, but rather the script, which just goes over some parts of the plot too quickly. While some scenes come across as a bit plodding and unnecessarily underscore the already obvious, aspects like Kate's battle with addiction in Alcoholics Anonymous are covered in short montages. Sometimes whole months pass in a few minutes and Kate, who was just completely broken, seems to have miraculously gotten a grip on her life. Thus, despite some intense moments, the film seems a bit too superficial to be considered an honest and comprehensive examination of the subject.

The other problem is that, despite a few light and even amusing moments, the film isn't exactly feel-good cinema after all, and it's probably hard to find many viewers willing to invest their ticket money in an alcoholism drama. Nevertheless: the attempt alone to present such a difficult topic in a life-affirming way and with appropriate lightness and to dispense with the usual tone of consternation makes this well-acted drama, despite its dramaturgical weaknesses, well worth watching for all lovers of American independent cinema!