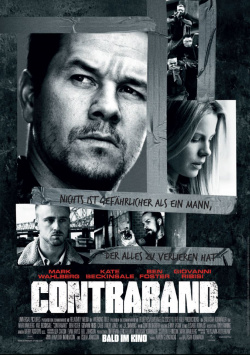 2008 director Baltasar Kormákur, who also became internationally known through his debut film 101 Reykjavik, was not only an executive producer but also the lead actor in the thriller Reykjavik - Rotterdam: Deadly Delivery. The film, directed by Óskar Jónasson, was successful not only in Scandinavia, so the idea of making a remake for the international market was naturally obvious. Kormákur has now taken over the direction of the US version Contraband and Mark Wahlberg has been recruited for the lead role he played in the original. Good prerequisites for a suspenseful thriller, which Contraband has then also become with some deductions.

Chris Farraday (Wahlberg) has had an impressive career as a smuggler. But he ended his criminal career some time ago and now leads a quiet life alongside his wife Kate (Kate Beckinsale) and their two sons together. But when Kate's brother Andy (Caleb Landry Jones) screws up a drug deal, Chris is caught up in his past again as he tries to appease his angry client Tim Briggs (Giovanni Ribisi). For in order to protect his family, he must settle Andy's debt, and the only way to do that is to once again use his talents as a smuggler. With the help of his best friend Sebastian (Ben Foster) and a crew led by his buddy Danny (Lukas Haas), Chris plans to bring a large shipment of counterfeit money from Panama to the United States. But not only the ship's captain (J.K. Simmons), who is a thorn in Chris's side because of his past, but also the increasingly impatient Briggs could endanger the enterprise. But that the real enemy is much closer to him, Chris does not suspect yet...

Contraband is a very entertaining thriller, which comes sometimes exciting, sometimes action-packed and then again a little amusing. Especially the scenes on the cargo ship and in Panama are popcorn entertainment at its best. However, there are too many subplots that keep slowing down the pace and make for too many unnecessary lengths. Sure, in the end, all aspects of the story are important to its resolution. But it certainly wouldn`t have hurt the overall picture if there had been more focus on the smuggling and less on Chris` family.

The cast is well chosen, with no real standout performances to be seen. Mark Wahlberg acts absolutely solidly, while Kate Beckinsale remains rather pale. Giovanni Ribisi gives a very convincing performance as the nasty drug dealer, but in some scenes he overdoes it a bit, making the character less scary and almost unintentionally funny. Ben Foster, Lukas Haas and J.K. Simmons all play on a good level, but their characters are drawn quite one-dimensional, against which even the most talented actors can only do little. Even though all this might not sound very positive, the acting chess points in an action thriller like Contraband simply don't matter as much as they would in a purely character oriented drama. It's just a shame that the actors don't quite get to showcase their talents here.

But aside from that, the film leaves an absolutely positive overall impression. The mix of action (the car chase through Panama City is superbly staged) and quieter thriller is exciting right up until the clever finale, and even if there is a moment or two at the end that drips with Holywood clichés, Kormákur's Nordic influence is always pleasantly palpable. So if you want to see a solid thriller with good actors and an exciting story, Contraband is absolutely the right choice. Not quite as good as the original, but overall an absolutely fine remake. Worth seeing

Cinema trailer for the movie "Contraband (USA/Großbritannien 2011)"
Loading the player ...