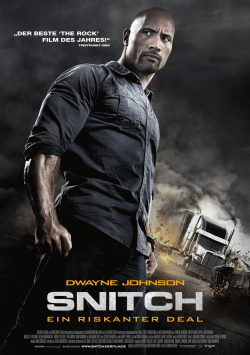 Despite the economic crisis, business is going very well for transport entrepreneur John Matthews (Dwayne Johnson). And family life with his wife Analisa (Nadine Velazquez) and their daughter together really couldn't be going any better. But the perfect life John has painstakingly built for himself over the past few years is abruptly shaken when Jason (Rafi Gavron), his son from his first marriage to Sylvie (Melina Kanakaredes) is arrested for a drug offense. Due to a seemingly absurd law, the boy could face up to ten years in prison, even though he has no criminal record. However, tough prosecutor Joanne Keeghan (Susan Sarandon) strikes a deal that could drastically reduce John's son's sentence: if he manages to turn a dealer in to the authorities, it would have a significant impact on Jason's sentence. With the help of his convicted associate Daniel (Jon Bernthal), John does indeed manage to gain access to the brutal drug dealer Malik (Michael K. Williams). But he has no idea how much danger he is putting himself and his family in, because behind Malik there is a much more powerful and dangerous man pulling the strings. For his latest film Snitch, director Ric Roman Waugh (Felon) has been inspired by two controversial aspects of the American justice system. Firstly, a law that makes minimum sentences for drug offences solely dependent on the amount of drugs seized. The other is so-called snitching, in which authorities allow convicts to reduce their prison sentences if they can help catch other delinquents. Waugh has incorporated this real-life background into a fictional thriller plot in which the convicted boy is unable to make such a deal with the prosecution because the only person he could snitch on was the one who put him behind bars and thus saved his own neck. And so the only option left is for his father to take over for his filius.

Because the film doesn't focus more on action until the last third, Snitch is carried solely by its dramaturgy and actors for long stretches. And that works surprisingly well. Sure, the dialogues are not exactly a prime example for profundity and most of the conflict situations Waugh sets up here are rather cliché. But the oppressive atmosphere of the story and the high tension level of some scenes comfort over many of the weak points. In addition, even muscleman Dwayne Johnson can hold his own acting against respected colleagues such as Susan Sarandon or Benjamin Bratt, despite some somewhat woodenly delivered dialogue. The Fast & Furious 6 star does not deliver an Oscar-worthy performance. For an (action) thriller like this, however, his performance is absolutely solid and engaging enough to leave a consistently positive overall impression.

What ultimately makes Snitch - A Risky Deal worth watching, however, is the fact that the film just doesn't just tell an entertaining and suspenseful story, but at the same time asks some important and interesting questions about the legal system that are worth discussing, and not just in the US. This doesn't make the thriller a highly sophisticated drama for lovers of intelligent head cinema. But even if his bulging upper arms don't suggest it, this new Dwayne Johnson vehicle has more to offer than just muscles, machos and mindless action. And for this there is then also despite some obvious weaknesses a more than deserved: Worth seeing!