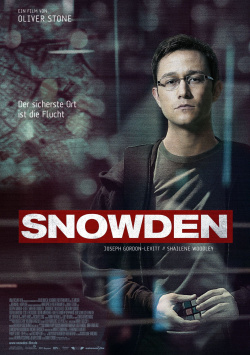 Edward Snowden (Joseph Gordon-Levitt) has the best chance of a great career in US intelligence. But after working as a private contractor for the NSA for four years, he leaves his job in 2013 and heads to Hong Kong. In his possession is a great deal of evidence of massive surveillance of internet and phone data, not just of US citizens. Rather, it was a worldwide surveillance of intelligence agencies, politicians but also private citizens. Snowden wants to make these surveillance practices of his intelligence agency public, knowing full well that he is putting himself, his family and anyone who helps him in great danger.

With Snowden, director Oliver Stone has once again directed a gripping political thriller, making it very clear whose side he is on here. As a result, his production can certainly be accused of a certain one-sidedness and perhaps even transfiguration. However, this doesn't change much about the fact that the film is extremely thrilling and superbly acted. In addition, the film - regardless of whether you think Snowden is a hero or a traitor - reminds us of a topic that is hardly discussed after only three years. And that, although really everyone is affected by it. Because whether you have something to hide or not, such surveillance practices are a scandal and a cause to fight about the importance of privacy online (even if many people are truly careless with it on social networks).

Maybe Stone is twisting the facts a bit or distorting them to fit his own personal image of Snowden and US intelligence. He can be accused of all that. But not that he doesn't perfectly know how to build up suspense and an oppressive atmosphere dominated by paranoia. In this, especially Joseph Gordon-Levitt can perfectly unfold his first-class performance. Unfortunately, the German dubbing completely loses how well Gordon-Levitt imitated Snowden's voice. He speaks completely different than you usually know it from him, without it seeming too acted. Especially when Gordon-Levitt's Snowden turns into the real Edward Snowden, it becomes clear what a performance the actor has delivered here. But also the many excellent supporting actors, which, in addition to Melissa Leo and Rhys Ifans, finally include Nicholas Cage again, make Oliver Stone's new political thriller quite great cinema.

Stone has managed to tell a story that should be known to everyone through news, newspaper articles or the award-winning documentary Citizenfour, so gripping that you as a viewer can not help but root for him. Even if there is no real resolution of the story - since this does not exist in reality - and as already mentioned the director could be accused of a lack of objectivity, Snowden leaves an all-round positive overall impression. A film that not only provides exciting entertainment, but also plenty of material for heated, yet very important discussions. And that makes him then also with small deductions: Absolutely worth seeing!

Cinema trailer for the movie "Snowden (USA/Deutschland 2016)"
Loading the player ...