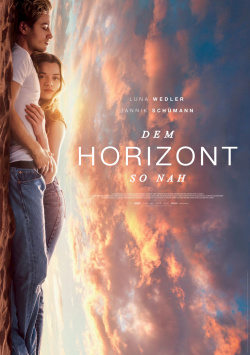 So Close to the Horizon

Jessica (Luna Wedler) has just turned 18 and has her future all mapped out. But in everyone's life, there are events that just can't be predicted. For Jessica, this is the meeting with Danny (Jannik Schümann), with whom she falls head over heels in love. The successful model is charming, handsome and very self-confident. Who can resist that? Not Jessica. But she can't stay on cloud nine for long, because she discovers that Danny is hiding a dark secret behind his shimmering façade. And now Jessica must ask herself if her young love is strong enough to survive the struggle she and Danny face.

This Close to the Horizon is based on the bestselling book of the same name by Jessica Koch, who adapted the true story of her first great love into the book. The heartfelt story has been convincingly adapted for the screen by director Tim Trachte (Abschussfahrt). Of course, the whole thing is not free of clichés. On the contrary - some characters and plot elements can be found in almost all simple TV and cinema romances. That's not very original, but in the fewest moments it's really annoying. What this novel adaptation can really benefit from are the two main actors. Luna Wedler, who was recently convincing in The Most Beautiful Girl in the World, manages to really give her character something like character depth and interesting facets despite all sorts of clichés. That her voice over comments come across a bit mumbled is easy to forgive.

Jannik Schümann's Danny seems - which is also due to the script (and probably the book) - at the beginning like the typical pretty boy with the typical bad boy attributes, but who is a good boy at heart, who reads a lot and can be soooo romantic. Luckily, though, even this character isn't quite as one-dimensional as it first seems. The dramaturgical twists and turns attributed to this character and Schümann's convincing performance comfort over some of the inevitable clichés.

And so it succeeds in something that many other teen romances fail to do: So Close to the Horizon really gets to the heart and creates some very beautiful moments that just seem genuine, especially on an emotional level. Yes, a little bit remains the photo-love-story character of the story. But especially compared to other representatives of this genre, the whole thing is much better and more layered than it seems to be at the beginning. Great actors - also in smaller supporting roles - and a nice soundtrack support this positive overall impression. For this there is quite clearly - especially for girls between 12 and 18 - a: Worth seeing!

Cinema trailer for the movie "So Close to the Horizon (Deutschland 2019)"
Loading the player ...