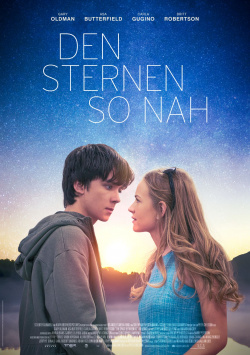 So close to the stars

So much Gardner (Asa Butterfield) would like to meet Tulsa (Britt Robertson), whom he met in a chat room. The teen is on fire for the pretty girl, who is clearly attracted to him as well. There's just one problem Tulsa doesn't know about: Gardner doesn't live on Earth, but in a colony on Mars. This is where he's spent his entire life so far. And for almost as long, he has dreamed of flying to Earth one day - also to find his father. When the opportunity finally presents itself, he doesn't hesitate for long, even though the doctors fear that his body might not be able to withstand the Earth's atmosphere. Barely arriving on Earth, the boy takes to his heels to find Tulsa so he can join her in searching for his father. But what awaits him on the planet, which is completely alien to him, Gardner would not have expected.

In recent years, most films aimed at the so-called Young Adult audience have been film adaptations of successful book series such as The Tribute to Panem or Twilight. But also remakes of youth film classics such as Footloose were very popular with the studios. In the past few years, one has searched in vain for really new material for a young target audience. With The Stars So Near, director Peter Chelsom has finally staged a story that stands on its own without a dystopian vision of the future, without an open ending and without glittering vampires.

He uses subtle science fiction elements to tell a quite wonderful love story of two young people who must overcome more than extreme distances to find each other. With great pictures and an unusual soundtrack Chelsom tells this beautiful story, which is not only exciting and romantic, but also has some very humorous moments. There are also some very thickly applied clichés. But these turn out relatively bearable, not least thanks to the two convincing young actors.

Asa Butterfield, most recently convincing in The Island of Special Children, is perfectly cast as the boy from another star. He plays Gardner's curiosity, his enthusiasm, but also his desperation very convincingly. Britt Robertson, as in so many of her films, once again pleases with a delightfully biting manner that contrasts pleasantly with her cute looks. It's just fun to watch these two on their road trip. It's amazing that an award-winning professional like Gary Oldman remains rather pale next to these young actors. His acting seems a bit powerless and forced. But even that only marginally dims the enjoyment of this interstellar love story.

What is more noticeably disturbing, on the other hand, is that the narrative flow feels a bit choppy at times. For example, the transition between individual scenes is in some cases arguably abrupt, leaving the viewer with the feeling that something is missing here. On the other hand, other moments are staged in such an extended way that small lengths arise. If these would have been trimmed a bit and other scenes would have been worked out better, Den Sternen so nah could have been something really great. But as it is, the film lacks that certain something that makes it more than just nice, visually appealing entertainment. Nevertheless: Story and actors are good enough to be able to certify a clear worth seeing