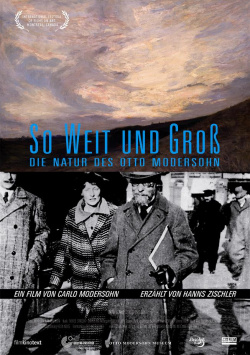 So Far and Tall - The Nature of Otto Modersohn

To trace the life story of landscape painter Otto Modersohn (1865 - 1943), filmmaker Carlo Modersohn, great-grandson of the famous painter, has come up with something very special. Using only the works of Modersohn and other artists of his era, archival footage and photographs from the period, as well as diary entries, texts and letters by Modersohn, his wife Paula Modersohn-Becker and writer friend Rainer Maria Rilke, the life and work of the landscape painter becomes a very special audiovisual experience.

For images and texts, performed by actor Hanns Zischler as the narrator, Robert Levin as Otto Modersohn, Verena Güntner as Paula Modersohn-Becker and Matthias Scherwenikas as Rainer Maria Rilke, are also accompanied by a film score composed especially for this biography and an atmospheric soundscape. What could easily have become a dry portrait of an artist has thus been woven together into an impressive journey into the past.

The film is neither comparable to a typical documentary, nor to a kind of filmed exhibition visit. Rather, Carlo Modersohn has created something entirely his own that, while quite special, can be warmly recommended to art lovers. And even if this film also works on the small screen thanks to the engaging colouring of Modersohn's works, interested viewers should definitely not spare themselves the trip to the cinema, because it is only on the big screen that it becomes clear that "So weit und groß" has become a small work of art itself. Worth seeing