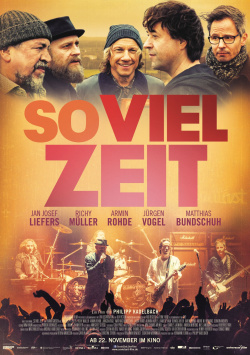 It could have been a life full of success and wealth. 30 years ago Rainer (Jan Josef Liefers) was on the verge of a breakthrough with his band "Bochums Steine". At the time, Rainer thoroughly ruined it for himself and his band mates with a freak-out during an important concert. Since then, Rainer's life has been a mess and he can't really get anything done, neither professionally nor privately. When his doctor tells him that he doesn't have long to live, it's clear to Rainer that he wants to make the most of the time he has left. On the one hand, to be a better father to his son. On the other hand, he wants to get back in touch with his former band mates Bulle (Armin Rohde), Konni (Matthias Bundschuh), Thomas (Richy Müller) and especially Ole (Jürgen Vogel). But whether there is enough time for that is more than questionable.

So much time tells a nice story - even if it may not be particularly original. With not exactly subtle, but in places delightfully biting humour, the comedy follows a man trying to make up for the biggest mistake of his life in the face of death. Jan Josef Liefers is very well cast as a failed musician and loser father. The same goes for his former bandmates. Granted, they are all stereotypes. But the well-chosen ensemble makes you easily overlook such criticisms. Armin Rohde in particular is just great as the single widower.

director Philipp Kadelbach tells the story with a lot of humor and also avoids drifting too much into the kitschy for long stretches, which can be called a small feat considering the initial situation. Towards the end, however, the whole thing turns out to be too predictable and the finale with its spasmodic feel-good effort unfortunately isn't successful at all. Still: until it comes to that, So Much Time offers entertaining, nice entertainment. Whether one must necessarily see this in the cinema, that remains to be seen.

Who wants to see a well-cast tragicomedy that shows that it's never too late for a second chance, is in good hands here. But if you're hoping for depth and dramaturgical surprises, you'll be bitterly disappointed by the last act at the latest. All in all, however, still clearly a: Worth seeing!

Cinema trailer for the movie "So much time (Deutschland 2018)"
Loading the player ...