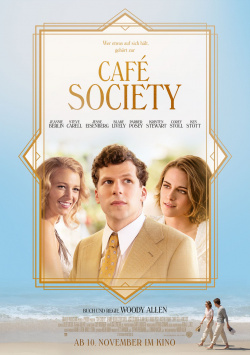 In the 1930s, young New Yorker Bobby Dorfman (Jesse Eisenberg) travels to Los Angeles. There, with the help of his Uncle Phil (Steve Carell), an influential Hollywood agent, he hopes to break into the dream factory. But instead of the big breakthrough he finds here in Vonnie (Kristen Stewart), the assistant of his uncle, the great love. But after a short period of happiness Bobby returns to New York with a broken heart. He starts here, working for his shady brother Ben (Corey Stoll) in his new nightclub. In the process, he proves to be a natural and turns the club into one of the hottest venues in town. When he meets the attractive Veronica (Blake Lively), his life seems to have finally arrived on the road to success. But then the past catches up with him again.

With Caf&eacute; Society Woody Allen travels back to the 1930s. Here he attempts to tell a story, but it seems a bit too big for his style. The story arc involving Bobby Dorfman during his stay in Los Angeles is well fleshed out and told at a coherent pace. But this is only part of a larger whole, as the other members of his family - most notably brother Ben and his criminal enterprises - are also meant to play an important role. Much of the story, however, is handled in passing, with Allen himself acting as narrator. And so, at many moments, the story feels badly rushed, overstuffed, and a little half-baked. The scenes where he takes time to flesh out the action through his usual good dialogue work really well, due in no small part to the once again excellent ensemble of actors.

However, at the latest when Bobby returns to New York, Allen rushes through the rest of the story too frantically. The whole subplot about the annoying neighbor of Bobby's sister or also about the machinations of Ben, seem badly undeveloped and also the relationship between Bobby and Veronica can't really develop credibly. Allen follows his own formulas too rigidly here, which doesn't really want to harmonize with the actual greatness of this story.

Much of Caf&eacute; Society is true, but far from all of it. And in the end, that leads to this becoming a decent Woody Allen, but just not an outstanding one. It is to the director's credit that he always tries to bring some versatility into his work. This has paid off again and again, especially in the last few years. But every now and then the intentions and the end result just don't quite fit together. And that's exactly the case here. For loyal fans of Woody Allen this mixture of comedy and romantic drama is still worth seeing. Only those who expect a new masterpiece will be disappointed, guaranteed