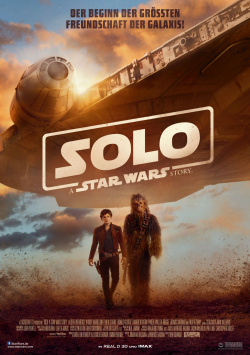 Survival on the gloomy planet Corellia can only be achieved by those who steal and cheat. Young Han (Alden Ehrenreich) is particularly good at this. However, he also has a goal: to get himself and his girlfriend Qi'ra (Emilia Clarke) off this planet and into a better future. They almost succeed, but then they get separated. Han manages to leave Corellia, but from then on has only one goal: to buy a ship to return and get Qi'ra. To do this, he joins a squad of smugglers led by Tobias Beckett (Woody Harrelson) in pursuit of a big score that would bring in enough money to buy a ship with. But when the plan fails, Han begins an adventurous journey across the galaxy that brings him new allies, but also unexpected surprises and dangers.

Those who know my movie reviews may already know: I'm a huge Star Wars fan. Yes, I too was a little disappointed by some aspects of The Last Jedi, and I'm also one of those for whom it's very clear: there is no replacement for Harrison Ford. Still, I was looking forward to Solo: A Star Wars Story and was also open-minded about Alden Ehrenreich from the start. Sure, he was never going to hold a candle to the old Han we came to know and love in Episode IV. But who knows - maybe he's good for a surprise after all. That the production has been plagued by quite a few complications is well known. The fact that the two directors Phil Lord and Christopher Miller were replaced by Ron Howard shortly before the end of the shooting, who then re-shot the film in large parts, is in itself not a particularly good sign. Still, I deliberately avoided joining the mass of fans who thus wrote the film off and trashed it in advance.

What can I say - my hopes for an entertaining cinematic adventure have been fully realized. Yes, the film plays it safe and is fan-service from front to back. It may not be particularly creative, but it always puts a big grin on your face as a fan. And the makers have managed to make some special stops - like the first meeting between Han and Chewie - really special, too. Well, maybe Han's legendary dice are hung into the picture a few times too often without any form of subtlety. And maybe the way he gets his last name Solo is a bit contrived, too. But overall, Ron Howard and the screenwriters (as well as the disgraced directors, whose work, yes, is still a bit of a thing) do very well with the way they give the fans what they (supposedly) want.

However, the film does have its weak points. One of them is L3-37, a (pre)loud robot lady who screams for equality and freedom for the robots. Here, as well as towards the end, the mace of political correctness is wielded too obtrusively, which - as with the topic of animal protection in The Last Jedi - just seems too forced and intrusive. On top of that, unlike C3-PO or K-2SO from Rogue One, L3-37 tugs at the audience's nerves quite quickly, making what should be an emotional scene downright relieving and almost unintentionally funny.

What the film really scores with, on the other hand, is its visuals. It's clearly a Star Wars movie, but it still has its own visual character as well. The effects are top notch, though it's nice to see plenty of practical effects used here as well, along with a lot of CGI. There are a few scenes that, as a fan, you immediately want to freeze and hang on your wall as a poster.

Now a few words about the actors. It takes a little while, but eventually Alden Ehrenreich is quite convincing as young Han Solo. He's clearly trying to match Harrison Ford's facial expressions and mannerisms, which he does very well in a few moments. Donald Glover is ideal casting as Lando Calrissian. There's really nothing to complain about. And also the Finn Joonas Suotamo is convincing as the new Chewbacca. The new characters are portrayed by Emilia Clarke (Game of Thrones), Paul Bettany and Woody Harrelson, with Clarke leaving the most positive impression. Woody Harrelson is also good as Han's shady mentor, but he's just typical Woody Harrelson.

Solo: A Star Wars Story is a lot of fun. Yes, the movie didn't need to be, but it certainly does justice to the beloved character of the Star Wars universe. Lots of action, great effects, a little humor, and a dash of romance - just what you'd expect from a great space adventure. And there are a few little surprises for fans as well. So the few weaknesses are no reason not to buy a movie ticket right away and dive into a galaxy far, far away once again! Absolutely worth seeing!