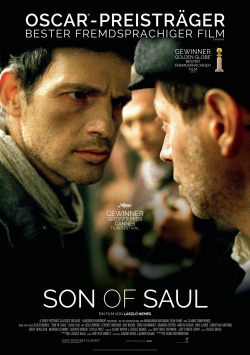 October 1944 at Auschwitz-Birkenau concentration camp: Hungarian Jew Saul Ausländer (G&eacute;za Röhrig) must help the Nazis in their cruel extermination campaign against the Jews as part of the Sonderkommando. Together with other members of the Sonderkommando he has to remove corpses, clean the deadly showers or dig trenches. But then he discovers a boy among the dead, in whom he thinks he recognizes his son. From then on, Saul has only one goal: to give the boy a proper burial in the presence of a rabbi. However, this seems an impossible task in the concentration camp - and now, of all times, the members of the Sonderkommando are planning an uprising that will enable them to escape from this hell.

Son of Saul from director L&aacute;szl&oacute; Nemes has already won awards at several festivals and now could also win the Oscar for Best Foreign Language Film. Of course, this has primarily to do with the subject matter, which is important and should never be forgotten. There's no question that Nemes has directed a powerful work that as a viewer you can't easily shake off. But apart from that, the question arises whether it was really necessary to stage such a challenging, emotionally exhausting story in such a bulky and almost tediously heavy way.

Naturally, it is understandable that Nemes wants to pull the audience relentlessly into the action with the very special camera style. He succeeds in this very well, but it is very exhausting for the viewer in the long run. Add to that the fact that the story at its core isn't enough to justify the nearly two hour running time. Rather, you get the feeling that it is primarily meant to show as much as possible of the cruel everyday life in a concentration camp. This is extremely shocking and disturbing, especially in the first few minutes, but loses much of its power in the long run.

Son of Saul will unfortunately only be able to open up to a small audience as the film it is. It has turned out to be too heavy - both in terms of content and craft - to be able to reach as many viewers as the ambitions behind the project would have deserved. If you're not afraid of heavy cinema fare in general and can put emotional intensity above dramaturgical intensity, you'll get a film with a long lasting effect. But if you're already worried that this drama might be too much of a challenge given the subject matter, you certainly won't be able to see what earned the film its great reviews and various film awards. And that's why there is only with some reservation a: Worth seeing!