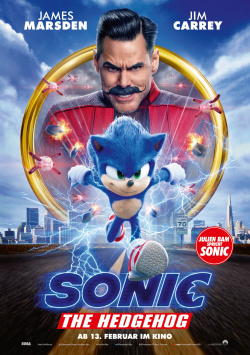 Available for purchase and rental on iTunes, Prime Video, and more. on iTunes and Prime Video

When he is forced to flee his own world, the bright blue hedgehog Sonic (voiced by Julien Bam) finds his way to Earth with the help of magical rings. In the closer of a small American town, he builds a new, safe life for himself. There's only one thing he's missing here: Friendship. This he makes one day rather involuntarily with the local policeman Tom (James Marsden), who soon has the difficult task of protecting Sonic from the malicious Dr. Robotnik (Jim Carrey). The latter wants to harness Sonic's extraordinary powers to usurp world domination. With the help of his ingenious but deadly inventions, he sets out to hunt down the two unlikely friends, who experience many a turbulent adventure on their escape.

Based on the blockbuster video game franchise of the same name from Sega, the first feature film version of Sonic the Hedgehog is now coming to our cinemas. When the first trailer for this was released a few months ago, an outcry of horror went through the worldwide fan community. The design of Sonic fell through mercilessly, so the creators went back to the drawing board once again. The film's release was postponed and Sonic was completely redesigned to look more like his game counterpart than before. Fundamentally, it definitely paid off to listen to the outcry of the fans. But does that actually make the cinematic version of the video game a good movie

I'm afraid that's impossible to say. Sure, younger moviegoers in particular will have plenty of fun with the nimble hedgehog. But not only that the production has turned out very interchangeable and relies too often on old familiar. Also, the humor is too much aimed at children up to 8 years, while the action for young kids is too fast-paced and actually too brutal. Yes, it's all totally over the top, so even little viewers will never really get scared. But is it necessary to shower children with such fast cuts and loud explosions? The fact that it's then also presented in such an over-the-top way, devoid of any charm, is just a shame.

If what makes a good kids' movie is that kids have fun, then Sonic the Hedgehog has indeed succeeded. Even if I don't like it, I have to admit that the movie actually provides a lot of entertainment value for its target audience, for which Jim Carrey is responsible in addition to Sonic. But if a good movie should be about more than special effects, action and clumsy gags, then parents should rather buy their offspring tickets for another movie. Therefore: Only with reservations worth seeing!

Cinema trailer for the movie "Sonic the Hedgehog (USA 2019)"
Loading the player ...