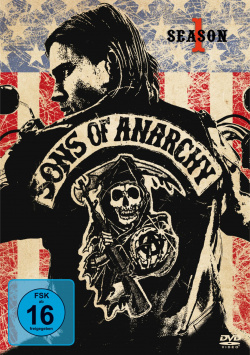 Content: Behind the tranquil backdrop of the small town of Charming, the air is on fire: after their secret weapons cache is torched by rival Mayans, the Sons of Anarchy, the motorcycle gang led by roughneck Clay Morrow (Ron Pearlman), are faced with quite a few problems. Not only do they have to retaliate to preserve their honor, they also have to look for new weapons. After all, the Niners' boys are waiting for their weapons shipment. And it would be unwise to mess with this gang and lose them as a major source of revenue. Too bad, though, that the bodies of two illegal immigrants who worked on the SoA's assembly crew were also found in the burned-out wreckage of the warehouse. This makes it harder for Clay and his boys to keep the police at bay.

Jax (Charlie Hunnam), son of the late founder of the Sons of Anarchy, meanwhile, has a whole other set of problems: his drug-addicted ex gave birth to their shared son way too early, and now the baby is desperately fighting for his life. In light of this situation, Jax begins to question Clay's sometimes very brutal methods. When he finds old notes from his father in which he wrote down his thoughts on the formation of the club, Jax fears that the gang now has very little in common with his father's philosophy. His mother Gemma (Katey Sagal), who is now involved with Clay, doesn't like to see her son having such doubts. The fact that his old flame Tara (Maggie Siff) shows up in town and makes eyes at Jax again is also a thorn in the side of the resolute Gemma. But all this is just the beginnings of events that threaten not only Clay and Jax's relationship, but the very existence of the Sons of Anarchy...

With Sons of Anarchy, Kurt Sutter (The Shield) has created a great drama series that blends elements of several genres into a gripping, highly entertaining whole. A little gangster thriller, some family drama, a little romance and a pinch of humor ensure that the stories around the fictional motorcycle gang from Northern California captivate from the first episode. The series draws its particular fascination from the fact that, as with The Shield, the boundaries between good and evil are constantly blurred. The gang members may be engaged in illegal business, but they are not drawn as one-dimensional villains. The same goes for the characters who actually stand for good (cops and the like), but who also reveal their abysses and dark sides.

The interestingly drawn characters are adequately brought to life by a top-notch ensemble of actors. Whether Katey Peggy Bundy Sagal, the great Ron Pearlman or the British Charlie Hunnam (Cold Blood), the actors, who are excellently cast up to smaller supporting roles, perfectly succeed in filling the characters they embody with life and character depth. Thus the viewer is bound to the supporting characters despite the moral dubiousness of their actions, which increases the tension level and the entertainment value of the series enormously.

In addition, there is an atmospherically dense production, which has a perfect balance of action, quieter character moments and loosening humor. It's sometimes bloody and brutal, sometimes moving or amusing, but always extremely exciting. Sons of Anarchy is once again an impressive example of the high quality that makes some TV series superior to some expensive cinema productions in terms of dramaturgy, acting and visuals. If you appreciate series like The Shield, you should definitely give Sons of Anarchy a visit as well. It's worth it!

Picture + Sound: Not only in terms of content, but also technically, this first season leaves a really good impression. The picture is very clean, offering atmospheric, very earthy colors, very good overall sharpness and a coherent contrast mix. The Dolby Digital 5.1 mix transports the dialogue clearly and powerfully out of the speakers and provides a pleasant dynamic in the tonal events with well-implemented surround effects such as gunfire, explosions and of course the hum of motorcycles. For a TV series, this is very good!

Extras: The first season has some extras to offer worth seeing and hearing. Starting off, the first disc features dropped scenes for all three episodes included here (about 6 min.), as well as an audio commentary on the pilot episode with series creator Kurt Sutter and his lead actors Charlie Hunnam, Ron Pearlman and Katey Sagal. Disc 2 also features deleted scenes from three episodes (approx. 12 min.), while Disc 3 also features an audio commentary on the episode The Attack, in addition to additional scenes (approx. 12 min.). For this commentary, Sutter was joined behind the microphone by director Guy Ferland and cast members Charlie Hunnam and Maggie Siff.

Most of the extras are on the fourth DVD. Here, there are cut scenes (about 5 min.) to watch for one episode. Then for the season finale, Sutter has assembled the entire Sons of Anarchy behind the mic for a commentary. In addition to Charlie Hunnam and Ron Pearlman, the cast also includes Kim Coates, Mark Boone Jr, Theo Rossi, Ryan Hurst, William Lucking, Tommy Flanagan and the late Johnny Lewis, cast member of Kip Half Sack Epps, who died in 2012. The commentary is a bit chaotic at times, but also has a very high entertainment value. Absolutely recommended for fans of SoA!

Conclusion: Sons of Anarchy is another example of how some TV series are far superior in many aspects to big cinema productions. Dramaturgically and acting, the series offers entertainment at a very high level, of which German viewers can now finally convince themselves. The first season of the series offers 13 great episodes and a number of good extras, which makes this DVD box more than recommendable. Since the second season actually can not come fast enough!