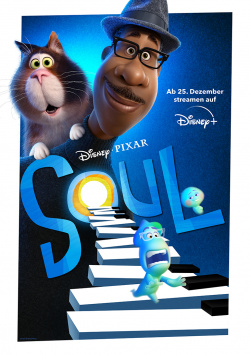 Music teacher Joe Gardner has a dream: He wants to celebrate his breakthrough as a jazz pianist and only pursue his very great passion. And indeed he gets the chance for the really big gig - only to be killed in a stupid accident shortly before. And so Joe's soul is suddenly on its way to the afterlife. But there's no way he's going to accept that - not so close to his big chance. On his escape from the afterlife, Joe suddenly ends up in the place where souls are formed before they come to earth. Here he is mistaken for the new mentor of Soul 22, who is so not keen on a life on Earth. But only when Joe succeeds in showing 22 what makes being human so great, and the stubborn soul finds her personal "spark" as a result, will he have a chance to return to his body....

"Soul" is one of those movies that was supposed to hit theaters in 2020, but then migrated straight to a streaming service - in this case, Disney +. It's nice, of course, that we finally get to see Pete Docter's ("Everything's Upside Down", "Oben") latest. But given all the great imagery conjured up again here by the specialists at Pixar, this wonderful film absolutely deserved to be on the big screen. Apart from that, one thing has to be said right away: If it was so far with Pixar films that these were actually children's films that could also be enjoyed by adults, it is actually the other way around with "Soul". In many aspects - whether it's the homage to jazz, or even the essential questions about what makes a person and their life tick - Pete Docter and his co-director Kemp Powers have staged a very adult film that, in not all but definitely many moments, can also reach younger viewers through its lovable characters and humor.

"Soul" is a wonderful film not only visually but also dramaturgically, bursting with original ideas and moving moments. Docter and Powers perfectly manage to weave rather obvious gags with tongue-in-cheek humor and weave it all into a story that shows that it's often the little things that make life so unique. You just have to open your eyes and your hearts to see that. It's that life-affirming message that just feels good, and not just in times of a global pandemic.

With Joe Gardner, "Soul" also has the first African-American hero in a Pixar film. His life and passions are heavily influenced by America's black culture. Still, what Joe experiences, what he dreams of, and what stands in the way of achieving his dreams is very universal, so really anyone - no matter what color or gender he/she is, where you come from, or whether you love or hate jazz yourself - can identify with his story. The film is simply beautiful, entertaining and surprising. No question about it: "Soul" is the best Pixar film since "Everything's upside down" and in many ways a throwback to what made the studio's first films so special.

The dubbing also deserves special praise. Instead of relying on (alleged) celebrities or YouTube stars - which unfortunately happens far too often in contemporary animated films - professional dubbing actors* were hired here. Even better: Often it is the well-known regular voices of the original speakers, such as Charles Rettinghaus for Jamie Foxx or Marianne Groß for Phylicia Rashad, who were hired. Even if the original version is better, the German language version is also more than successful. And so there is here in almost all points the highest rating and in the end a clear: Absolutely worth seeing!

"Soul" is now available on Disney+