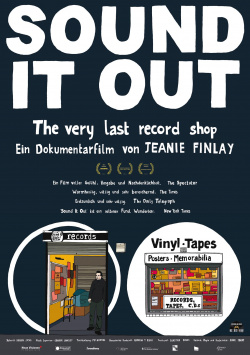 A few years ago they existed on almost every corner, especially in the big cities, but today they are almost completely extinct: small independent record shops have become a real rarity in times of big electronic chains and music portals. In the UK alone, over 500 such shops have closed down in recent years. In the town of Stockton in the Teesside region, stands Sound it Out, the last vinyl record store in the northeast of England. On 115sqm the music fan will find almost everything his heart desires. Tom, owner of Sound it Out, offers over 50,000 records and CDs to his customers. For many who come here regularly, music is more than just a passion and the store is a kind of second home. Reason enough for filmmaker Jeanie Finlay to dedicate a documentary to her former schoolmate Tom's record shop and its customers.

Sound it out is, of course, first and foremost a portrait of the shop, its staff and some regular customers. But at the same time it is also an engaging portrayal of the region, whose economic future is as uncertain as that of the record store. There, Tom is only too happy to share his love of music with his customers, even when he can't share their tastes. He knows what it means to love a particular piece of music and to associate it with important memories. Customers appreciate Tom's approachability, expertise and enthusiasm. At the end of the film, an older regular customer who likes to buy songs at the Sound it out that he has previously heard at the nearby pub sums it up perfectly, "It's a great service. You just get everything here, except light ladies from Thailand.

Jeanie Finlay was fascinated by how much the order of a record collection can tell you about a person. The customers she introduces in a little more detail then are extremely diverse collectors. There is for example the passionate Status Quo fan Shane, who wants to have his record collection melted down to a coffin after his death, so that his beloved records won't fall into the wrong hands and be buried with him. Or Chris, who deposits £100 with Tom month after month, for which he can then add to his collection of over 2000 strictly alphabetical records. Or metal fan Gareth, for whom music and his friendship with his mate Sam are the only things keeping him from suicide. These people simply cannot and will not imagine a life without the Sound it Out.

Sound it Out reawakens, especially for viewers over 30, the blissful feeling of what it was like to browse around a record shop, perhaps finding a real gem, and what it was like to then set the needle of the record player to the disc for the first time and, after the slight crackle, hear the first sounds of an album that might stay with you for life. It's a feeling that has been completely lost in an age where you can actually find anything quickly on the internet without much effort. A charming, amusing and entertaining documentary that not only music lovers and passionate record collectors should definitely not miss. Absolutely worth seeing!

Cinema trailer for the movie "Sound it out (Großbritannien 2011)"
Loading the player ...