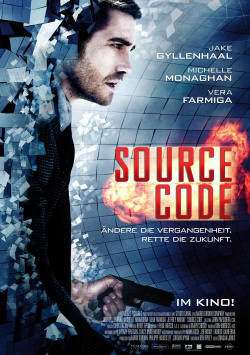 With the science fiction drama Moon, Duncan Jones, son of the legendary David Bowie, has delivered an impressive directorial debut. With a low budget and really only one actor, Jones directed some pretty great cinema. For the sequel Source Code, the director had a much bigger budget and more actors at his disposal, but that didn't make the fantasy thriller any less compelling.

When Captain Colter Stevens (Jake Gyllenhaal) wakes up on a train, he doesn't know what hit him. The woman sitting across from him seems to know him. But he is completely unfamiliar with Christina (Michelle Monaghan). When he escapes to the bathroom and looks in the mirror, he looks into a face that is foreign to him. Before he can think seriously about the strange occurrences, the train is rocked by a violent explosion - and Colter wakes up again, this time in a hermetically sealed capsule, in which he is connected only by computer with a woman named Goodwin (Vera Farmiga). She explains to him that he has the mission to find out who is responsible for the bombing of the packed train, so that further planned attacks could be prevented. To that end, Colter is transported into the body of Sean, the teacher who died on the train. He has only eight minutes to complete his mission. With each leap into the alien body, the soldier gets closer not only to the solution, but also to Christina - but saving her life seems impossible.

Source Code could, at first glance, be sold as a thriller variation on And Every Day Gets a Groundhog. But that's not nearly enough to describe this clever piece of popcorn cinema. For the viewer will also find elements from films like Inception or Total Recall in the thrilling production. Duncan Jones succeeded in creating something completely his own out of the elements that are known per se, which can captivate and entertain until the end. Even if it is a pure entertainment film and real claim is limited, the fantasy thriller is always on a very high level.

This applies not only to the staging and the well-used special effects, but also to the actors. Jake Gyllenhaal proves to be absolutely convincing here not only in the dramatic scenes, but also makes a really good figure as an action hero. The pleasant thing is that he doesn't seem to take himself too seriously and brings some of the mischievousness into his character that made 80s action stars like Bruce Willis so entertaining and cool (even if Gyllenhaal is still far from being in the same league as Bruce Willis when it comes to action). At the beginning Michelle Monaghan threatens to degenerate into a pretty accessory, but then she slowly but surely establishes herself as an important and convincing character. The chemistry between the two is right, which also makes the few romantically tinged moments work very well.

Source Code is overall not quite as clever and original as Jones` debut, but those who appreciate popcorn entertainment at a high level will be thoroughly entertained by this fast-paced and entertaining fantasy thriller. Highly recommended