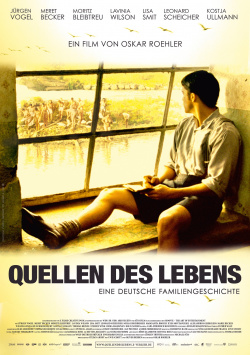 Robert Freytag looks back on the moving story of his family, three generations and a time full of political, social and personal changes. His story begins in the Franconian province in the 1950s with the return of his grandfather Erich (Jürgen Vogel) from war captivity. His marriage to his wife Elisabeth (Meret Becker) seems at an end after years of estrangement. But against all odds, the family pulls together and Erich even manages to claim a share of the German economic miracle by producing garden gnomes. Years later, Erich hopes his son Klaus (Moritz Bleibtreu) will follow in his footsteps. But Klaus would much rather become a writer. When he meets Gisela (Lavinia Wilson), who comes from a wealthy family, he seems to have found his soul mate. A passionate love affair develops between the two, from which little Robert is born after only a short time. But with marriage and child comes the end of passion. While Gisela celebrates success as a writer and wants to live out her free spirit, Klaus sinks into a mixture of creative self-loathing and frustration, which Robert also feels. After the separation of his parents begins for the boy a true odyssey through the entire family and large parts of Germany, which only seems to find an end when Robert (Leonard Scheicher) meets his childhood sweetheart Laura (Lisa Smit) again as a young man.

Like his parallel novel, Origin, Oskar Roehler's latest film, Sources of Life, is heavily tinged with autobiography. Roehler mixes personal memories and contemporary history with stylistic devices of drama, comedy and family epic, thereby allowing the viewer a highly entertaining, colorful, nostalgic journey into the past of the Federal Republic of Germany. Of course, Oskar Roehler wouldn't be Oskar Roehler if he hadn't put his own stamp on the whole thing. He uninhibitedly uses kitsch, clichés and occasional overacting of the actors without making the story or its characters ridiculous. At times, this may seem a bit odd, slightly whimsical, or even a bit exhausting. But his view of the world between garden gnome, cheese hedgehog and trip to Italy is always entertaining.

That the film works so well despite a few scenes that take a bit of getting used to is certainly due to the set design, the camerawork, the choice of music and the work of the make-up artists, in addition to the well-observed screenplay. However, the excellent ensemble of actors makes a particularly important contribution. The actors manage very well to play their roles so seriously even in moments that seem a bit silly, from which the film draws a lot of additional entertainment value. Especially Jürgen Vogel has to be pointed out, who masters the transformation from an extremely unpleasant former prisoner of war with gruesome tooth remnants to an inherently lovable grandfather with a proud rack of teeth with bravura. Lavinia Wilson is also great as Robert's mother Gisela. At the beginning, the audience can understand why Klaus falls in love with the somewhat over-excited, but extremely charismatic and charming young woman. The transformation that this character then undergoes, Wilson puts so convincingly that it is downright fun to despise raven mother Gisela.

The transformation of the characters and their stories is, in any case, what makes this film so entertaining and worth watching, despite its substantial running time. There is no stagnation here, everything is constantly evolving and moving. It's not always funny or pleasant, not always light and enjoyable, but that's exactly where the film's appeal lies. Who would think, for instance, at the beginning of the film that the love story, of all things, which is drawn here in the least romantic and downright depressing way, would end up being the one that seems to survive all the ups and downs and culminate in a truly touching scene? That Roehler manages such transformations of his characters believably, even though he also so deliberately overdraws them, is a bit of a feat.

Sources of Life is a tremendously versatile and multi-layered film. A little crazy, a little long, a little exhausting. But at the same time it is also very well acted, extremely amusing and rousing and simply good. That's what makes German cinema fun. In the end, we can only hope that a sequel, which producer Stefan Arndt openly dreams of in the press booklet, will actually become reality. For lovers of the somewhat special German film applies: absolutely worth seeing!

Cinema trailer for the movie "Sources of Life (Deutschland 2012)"
Loading the player ...