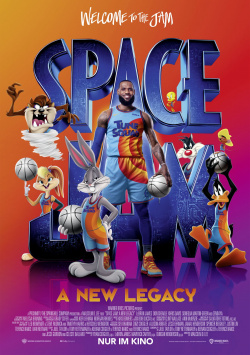 LeBron James is THE NBA superstar. But even a professional basketball player like him is powerless against the latest technology. He has to find that out when he and his son Dom are captured by an AI (Don Cheadle) in a digital world of the Warner Bros. movie studio. His only way out: he has to beat the AI team at basketball. Sounds easy enough for a LeBron James at first, but there are two catches: for one, the opposing team is led by his son Dom, of all people. And secondly, only the Looney Tunes around Bugs Bunny, Daffy Duck & Co. are at his side. Even the success-spoiled "King" James can only lose...

Twenty-five years ago, the movie "Space Jam" not only helped the cult characters from the WB cartoon studio to new screen fame. Basketball superstar Michael Jordan was also able to celebrate a successful acting debut with the turbulent mixture of animated and live-action film. A quarter of a century later, the sequel is now coming to our cinemas. It's not really a sequel, even if the original is alluded to a few times ("This all sounds very familiar to me"). Rather, it's a reboot, for which the title no longer really fits, since the events no longer have anything to do with "Space", but take place in the digital world.

Besides that, the structure of "Space Jam: A New Legacy" is very similar to the original. Both films begin with a scene from the childhood of each basketball star, and there is a brief glimpse into the family life of the athletes. But then the signs are reversed: if in the 1996 original it was the toons who needed help from Michael Jordan, now it's the NBA player who needs help on the toons relegated to the far corner of the WB's digital world. And from there, the new movie treads very familiar paths again.

Warner Bros. has LeBron James and his companions travel through various movies and series from the studio. You'll sometimes come across works that make you wonder what they're doing in a kids' movie. The allusions to "Game of Thrones" or "Mad Max" should not be understood by any child. The basic idea is quite funny, but the realization doesn't quite meet the target audience. And that is clearly under 12 years old. Another problem: The film takes an enormous amount of time at the beginning to work out the very conventional family conflict. That's not really exciting, especially for kids. By the time Bugs Bunny and company show up, almost 20 minutes pass - and that's really way too long.

The humor is similar to what we saw in the first film. There is a great cameo appearance with an indirect nod to the original. That one provides a really good laugh for anyone who understands the gag. Otherwise, the entertainment value remains rather manageable. Somehow "Space Jam: A New Legacy" lacks the charm of its predecessor, even if everything is even bigger and more colorful here. Still, kids between the ages of 8 and 12 are in for a lot of fun. No slam dunk, but a nice entertainment film with some decent gags. For this - with deductions - there is still a: worth seeing!