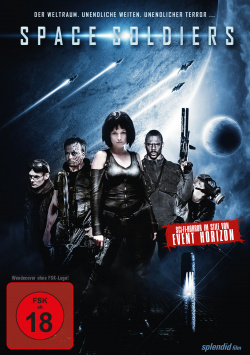 Content: Captain Jekel (Sean Patrick Flanery) desperately chases through outer space to track down a mysterious device that contains a dangerous alien technology that Jekel definitely doesn't want to see in the hands of his enemies. But his arch enemy, the looter Wake (Roark Critchlow), who works together with Jekel's ex Emerson (Louise Linton), of all people, has also set out in search of the device and seems to be one decisive step ahead of Jekel. And other intergalactic mercenaries are also targeting the explosive alien technology. For Captain Jekel, it is clear that he must take possession of the machine at all costs. But are his motifs really as noble as they seem at first?

"Space Soldiers" is the feature film debut of Travis Zariwny, who previously worked primarily as a set designer or 2nd unit director on productions such as the amusing horror film "Behind the Mask". For his directing debut, he tried his hand at a science fiction flick. This was a risky decision as he had only a very small budget available. Since science fiction movies usually live from their special effects, a low budget production can look very cheap very quickly. But if the effects are right, it's easier to overlook a thin script or weak actors.

Zariwny's problem is that he has neither good effects nor a convincing script to offer. There are a few shots that really look good and for which apparently a large part of the budget was used. Because other effects seem to have been copied from an old 80s computer game. The director tries to make up for this with the set design. But also the backdrops of the interior of the spaceships don't look very spectacular.

With a lot of good will you can still see something positive about the movie. Because especially a surprisingly bloody scene, which is extremely entertaining in its completely surprisingly exaggerated way, reveals a certain irony, which also shines through in the play of some of the actors. If you're willing not to take the whole thing too seriously, some scenes offer a solid entertainment value.

However, the bottom line is that "Space Soldiers" didn't turn out to be a very good movie. A somewhat higher budget and especially a better script, that doesn't rely so much on common clichés and flat dialogues, might have made a solid B-movie out of the basic idea. But the weaknesses are simply too great to be able to recommend this work with a clear conscience. Only for genre fans who like it especially trashy, maybe just worth seeing!

image + sound: The technical implementation of the DVD leaves a quite positive impression. The image sharpness is at a high level and makes many details visible even in darker scenes. The colouring is rather reduced, but captures the supercooled atmosphere well. In addition to the very directionally mixed dialogues, there are also a few harmonious surround effects to be heard in the sound, which provide a little dynamism in the tonal events. Good!

Extras: Unfortunately the DVD has no extras except the trailer for the movie.

Result: "Space Soldiers" is a dark science fiction adventure, which has some good moments to offer, but overall has to suffer from its very low budget. The effects sometimes look as if they came from an 80s arcade game and are therefore not even on the level of contemporary games. Here and there there there are also some well done effect shots, but they are far too rare to raise the movie's trash factor to a decent level. A few well-done scenes, in which the actors can score with a little bit of self-irony, increase the entertainment value, but at the end of the day they can't prevent that this feature film debut of director Travis Zariwny is only partly worth seeing.