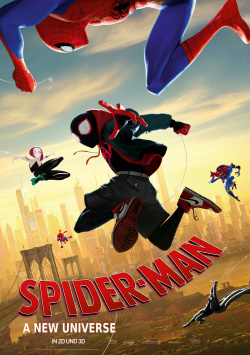 Young Miles Morales is amazed when he has the same superpowers as Spider-Man after a spider bite. But does he even have what it takes to be a superhero? He soon has to ask himself that question when Spider-Man is killed trying to destroy a dangerous machine owned by the villain Kingpin. The machine opens a portal to other dimensions and transports different versions of Spider-Man into Miles' world. An older, frustrated Peter Parker reluctantly becomes his mentor, and together with Spider-Gwen, Spider-Man Noir, Spider-Ham, and the anime version Peni Parker, they set out to stop Kingpin. But can they all get back to their respective universes before the entire world is destroyed by Kingpin's machine?

Now another Spider-Man? If you're worried that Spider-Man: A New Universe will retell Peter Parker's origin story for the umpteenth time, rest assured. What has been conjured onto the screen here - it's hard to describe it any other way - is something completely new in the Marvel universe. Not only that this is an animated film, which is visually oriented to the style of old comic books. The creators, led by the great producing team of Phil Lord and Christopher Miller (The Lego Movie), have also managed to infuse an original story with delightfully whimsical humor without sacrificing any of the excitement.

There are stretches of laughter in this Spider-Man - such as right at the beginning, when one of the most controversial scenes from Sam Raimi's Spider-Man 3 is delightfully self-deprecating. But also Spider-Ham, a superhero of the other kind, or the great Spider-Man Noir - in the original spoken by Nicholas Cage - provide a lot of fun. Spider-Man: A New Universe works so well because it takes a very different approach to the superhero universe than other comic book adaptations have done so far. It's refreshing and extremely entertaining.

Admittedly, the visual style and the sometimes very quick cuts do get a little tiring at times. There are scenes where the movie in 2D seems a bit like watching the 3D version without glasses. You have to be able to get involved with that in order to enjoy the film in all its glory. Then you also notice the many small details - like advertisements, movie posters and the like, which look a bit different in each universe. Also particularly nice is one of the last cameo appearances - here in animated form - of the recently deceased Stan Lee, which makes for some wistfulness as well as an amused grin.

Spider-Man: A New Universe is not only an unusual superhero movie, but also an animated film that visually swims beautifully against the mainstream tide. The perfect cure for superhero fatigue and proof that the creative air is far from out of this genre. For this there is in every respect the top mark and a very clear: Absolutely worth seeing - this applies by the way also to the wonderfully weird post-credit scene, which pays winking tribute to the very old Spidy cartoons. Great!

Another tip: The film is released from 6 years, but for this age it is simply too fast, too loud and in places too dark. Our recommendation is rather from 9 years!

Cinema trailer for the movie "Spider-Man: A New Universe (USA 2018)"
Loading the player ...