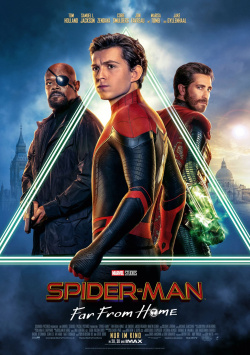 The events of the past few months have left their mark on everyone - including the superheroes who fought Thanos. For Peter Parker (Tom Holland), the upcoming school trip to Europe is the perfect opportunity to just leave his Spider-Man costume hanging in the closet and be a normal kid for a few days. And maybe he can finally confess his feelings to his secret love MJ (Zendaya). Too bad that Nick Fury (Samuel L. Jackson) puts a spoke in his wheel. Because he is already waiting for Peter in Venice to recruit him for a new assignment: He's to help the superhero Mysterio (Jake Gyllenhaal), who hails from a parallel world, destroy terrible beings that could wipe out the entire planet.

Spider-Man: Far from Home has the difficult task of transitioning the MARVEL Universe into the next chapter after the mega-success of Avengers: Endgame. On the one hand, the film needs to address the dramatic and everything-changing events. On the other hand, it also needs to turn a whole new page in the franchise's success story. The film manages to do the former in particular with flying colors. It manages to consistently and believably trace how the world has changed as a result of the events in Endgame, and how much Peter is still coming to terms with the heavy loss he suffered. At the same time, the film also quickly finds its way back to the humorous lightness that had distinguished Spider-Man: Homecoming.

With Jake Gyllenhaal's Quentin Beck a.k.a. Mysterio, the film then also introduces a very charismatic superhero who fits perfectly alongside Spider-Man. But of course, the creators again have a few surprises in store, so the cards are reshuffled once again as the story progresses. As the whole thing heads towards the big showdown, CGI overkill looms again. But even if the action here is a little too much of a good thing, the consistently high entertainment value of the film is hardly tarnished by this. That's because the mix of fantasy action and comedy, of fast-paced moments and quieter scenes, and of those moments when it becomes clear that behind the superhero mask is just a normal teenager, is what makes this second solo outing for Tom Holland as Spider-Man so successful.

In this case, it's also really worth sitting through the credits, because just when you think the story is over, the whole thing takes another whole new turn through the mid-credit scene that will change Peter Parker's life forever. So the Spider-Man's next appearance really can't come soon enough.

Spider-Man: Far from Home convinces with good actors, wonderfully humorous ideas, great effects and the good chemistry between Tom Holland and Jake Gyllenhaal. There are a lot of really good laughs, well-executed suspense, but also some deeply human moments that give the film a certain charm. Yes, the wheel isn't reinvented here. Ultimately, the film is just more of what MARVEL has served us so successfully over the past few years. But let's face it, when you're so well entertained in the process, it's not a tragedy if the franchise isn't given a whole new lease of life. Therefore, after more than two very entertaining hours, there is also a very clear: Absolutely worth seeing!!!

Cinema trailer for the movie "Spider-Man: Far from Home (USA 2019)"
Loading the player ...