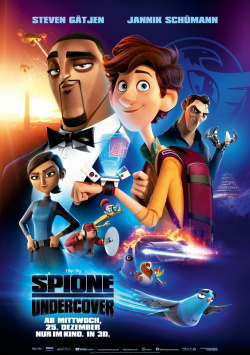 Superspy Lance Sterling is one of the coolest agents in the world. The same can't exactly be said of young scientist Walter Beckett. While he also works for the Secret Service, his idiosyncratic inventions don't sit well with his colleagues and superiors. When he addresses Lance directly and puts his foot in his mouth, Walter ends up on the street. But not for long, because when Lance comes under suspicion of being a traitor, he needs the help of the clumsy genius - not knowing that he will first turn him into a pigeon. How on earth are you supposed to save the world like that?

I understand that nowadays you need celebrity voice actors for animated films so that you can send them to various red carpets and interview sessions. But in the case of Spies Undercover, I lack any understanding of the German dubbing. And that's why I'll start my review with it. The main character Lance Sterling is so clearly tailored to the original speaker Will Smith that they could have advertised exactly with that in Germany - if they had hired his dubbing regular. But instead they choose presenter Steven Gätjen. Sure, he's a nice guy, but he's not a voice actor. And let's be honest: Which child between the ages of 6 and 12, who could be described as the target group for this film, says: Mum, I have to see this film. That's Steven Gätjen speaking the lead role. For the life of me, I can't understand what went through the minds of the people in charge - especially since this decision didn't do the film much good. Lance Sterling is Will Smith - and that includes his voice.

Other than that, Spies Undercover is routine, mass-produced stuff. The people look like they do in really all the animated movies of the last few years. Artistic originality? Wrong! The story, which is based on a short film, offers a few nice ideas and amusing gags, but also treads too worn paths. It may be that children don't notice this. But it makes clear that most animated movies are not made for eternity, but only for quick consumption. And that's kind of a shame.

What parents should definitely know before taking their little ones to this movie: Yes, there are some funny animals and kid-friendly humor. But there's also a really nasty villain who doesn't shy away from killing people - which you get to see more or less directly. The action is also very fast-paced, which might be too much for some children. Small children under the age of 10 should not be exposed to this - despite the release from 6 years. There are for this target group clearly nicer films currently in the cinema, which get along without explosions, murder and manslaughter.

Spies Undercover is not bad, but in the end very unoriginal. Because of the unnecessary brutality - even if it is very cartoony - and the poor choices in the German dubbing, I can therefore only give this animated film a worth seeing with reservations.