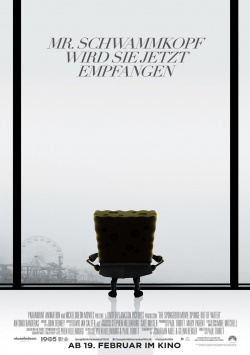 SpongeBob SquarePants lives with his friend, the dorky starfish Patrick, deep in the sea, in the small town of Bikini Bottom. There the yellow sponge always lives happily in a pineapple, works in the fast food restaurant Krosse Krabbe and gets on the nerves of his boss Mr. Krabs there with his constant good mood. But that ends when the nasty pirate Burger Beard (Antonio Banderas) manages to steal Mr. Krabs' secret Krabby Patty recipe. Suddenly, there isn't a single Krabby Patty left and chaos and anarchy erupt in Bikini Bottom. With arch-nemesis Plankton, of all people, SpongeBob, his ever-annoyed neighbor, Squid Thaddeus, Patrick, Mr. Krabs and Squirrel Sandy must go ashore to get the recipe back. But to stand up to the nasty burger pirate, this unusual team would have to literally gain superpowers.

The TV series SpongeBob SquarePants from the children's channel Nickelodeon has been generating good ratings and a still-growing fan base worldwide for almost fifteen years. Since 1999 SpongeBob, starfish Patrick, octopus Thaddeus, Mr. Krabs or SpongeBobs meowing snails inspire viewers of all ages. The sometimes very offbeat humour and the lovingly simple animations have also taken the hearts of older viewers by storm. Up to 35% of viewers are said to be adult fans, which doesn't seem entirely far-fetched. After all, if you get involved with the quirky characters of Bikini Bottom, you'll be hooked after just a few episodes. You just can't help but love SpongeBob (and Patrick in particular).

That the series also works on the big screen was successfully proven by the first feature film almost eleven years ago. But even though the hilarious adventure has grossed more than $140 million worldwide, a second big-screen outing for the sponge and his friends has been a long time coming. With SpongeBob SquarePants 3D, the makers now want to really let it rip again and offer fans a very special adventure in 3D. However, the film starts out rather ordinary, both in terms of style and content: Plankton wants to steal the secret formula again, Mr. Krabs interferes and SpongeBob is as always in a good mood. But soon a crazy adventure starts, which first revolves around a time machine, before it goes to the surface in the last third.

Here the style of the film changes. The characters become computer animated 3D characters, which then even mutate into real superheroes after a few minutes. But it is this part of the film, which is also the focus of the promotion, that works least well. While at the beginning the movie is dominated by wonderful anarchic humor, the makers just turn it up too much towards the finale. The whole thing degenerates into a chaotic battle of material, which offers some funny moments, but lacks any form of charm.

However, even if the first movie was better in every respect, SpongeBob SquarePants 3D also offers enough good laughs and weird ideas that absolutely justify a visit to the cinema for fans. From time to time you wonder what the makers have taken to come up with such crazy ideas, which in some cases are just a little too much of a good thing. But the bottom line is that the film is a wonderfully crazy fun, which also works perfectly in feature length. Therefore, if you can't get enough of SpongeBob, Patrick and co. and already liked the first movie, don't miss this 3D adventure. Worth seeing