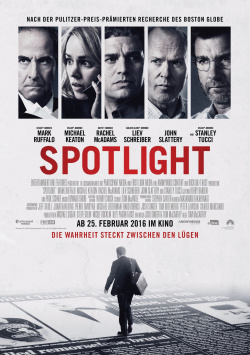 Boston in 2001: Walter Robby Robinson (Michael Keaton), head of the Boston Globe's investigative team, is assigned by his new boss Marty Baron (Liev Schreiber) to have his Spotlight team investigate alleged cases of child abuse within the Catholic Church. It's a problem that everyone knows exists, but has turned a blind eye to. As the journalists begin their research, an unexpectedly cruel truth quickly reveals itself to them. For the scandal takes on ever greater dimensions than previously expected and reaches not only into the highest circles of the church. Politics and justice are also involved. And so the team gets to deal with an enormously powerful opponent who does everything to prevent this scandal from being made public.

The Untouchables has found a worthy successor and it is called Spotlight. Alan J. Pakula's 1976 classic, starring Dustin Hoffman and Robert Redford, is considered the mother of all journalism thrillers, and similar works today still have to measure up to its quality. Few films in this genre have really managed to be in the same league as the Watergate thriller. But this look inside the newsroom of the Boston Global, based on true events, comes damn close. There are several reasons for that. First, of course, there's the great ensemble of actors, who are just incredibly fun to watch. The scenes between Mark Ruffalo and Stanley Tucci alone are pure gold. But also Michael Keaton, Rachel McAdams, Liev Schreiber or John Slattery deliver really first class. The actors play with perfect timing the balls to each other, whereby no one tries to play particularly in the foreground.

That this interaction works so well, is also due to the direction of Tom McCarthy, who also co-wrote the script. After McCarthy with his last film Cobbler - The shoemaker with Adam Sandler was criticized by critics and went badly at the American box office, he can redeem himself with this excellent work. For Spotlight reveals some very great strengths, especially in terms of direction and screenplay. The story the film tells is extremely dark in itself. It infuriates and saddens and confronts the audience with terrible truths. McCarthy has managed to avoid two things perfectly in the face of this very difficult premise. First, he has not succumbed to the temptation to let the film become a generalized indictment of the entire Catholic Church. On the important points, he knows how to differentiate and thus does not attack the faith itself, but only those who abuse it.

On the other hand, the screenplay is able to counter the gravity of the story with a pleasantly loosening lightness. That's not to say that the film doesn't deal with the subject matter appropriately, that it's inappropriately humorous, or even that it offers shallow entertainment. Quite the contrary. Nevertheless, clever dialogues, which also have a certain amount of wit, prevent the basic tone of the film from being too depressing. By creating a high entertainment value this very heavy and important topic is made accessible to a broader audience. And that's what you have to give a film like Spotlight credit for.

If you appreciate intelligent dramas about the importance of investigative journalism, if you have a soft spot for outstanding ensemble cinema, and if you also enjoy tackling controversial issues, then you shouldn't miss this multi-award winning work. Absolutely worth seeing!!

Cinema trailer for the movie "Spotlight (USA 2015)"
Loading the player ...