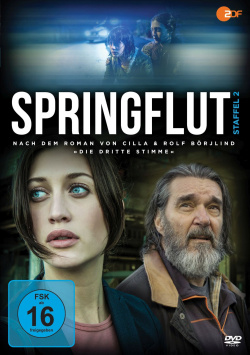 Content: Half a year has passed since Olivia Rönning (Julia Ragnarsson) discovered the truth about her origin. After spending the last few months in Mexico to find herself, she now returns to Stockholm. But as soon as she arrives, she is drawn into a new, dramatic case. Sandra (Saga Samuelsson), the daughter of customs officer Bengt Sahlmann, falls desperately into her arms after she has just found her father hanged. It quickly becomes clear that this is not a suicide. But why was Bengt killed? Are drugs that recently disappeared from the customs evidence room the reason?

At the same time the dismembered body of a blind woman is found in Marseille. When Abbas el Fassi (Dar Salim) reads about it in the newspaper, he asks Tom Stilton (Kjell Bergqvist) to go with him to Marseille to find out more about this murder. Although this journey involves a considerable risk for Abbas, he simply has to take it upon himself. Because the dead was his great love, with whom he once worked together in the circus.

Until the proximity in time these two murder cases seem to have nothing to do with each other. But the more the pieces of the puzzle are put together, the clearer a connection becomes - a connection that reveals a terrible truth that should be suppressed at all costs…

The second season of the Swedish crime series "Springflut" is based on the novel "The Third Voice" by Cilla and Rolf Börjlind. The season deals with two really stirring murder cases, but the real tension arises from the question of how the makers will succeed in bringing the two different storylines together. At the beginning, the connections may seem somewhat constructed. Especially the fact that Olivia gets involved in the next case, as soon as she gets out of the taxi, seems to be a little bit hard. But the more puzzle pieces you put together, the better the whole thing works.

The atmospheric visual language, the contrasts between the sun-drenched Marseille and the gloomy Stockholm, as well as the convincing actors ensure that smaller lengths are quickly forgotten in the production. Especially Dar Salim ("Game of Thrones") and Kjell Bergqvist deliver really strong performances. All in all, it's very positive that not only the main characters, but also supporting characters are given room for development, which is also well used by the convincing actresses and actors. In the second season, "Springflut" has a few small dramaturgical weaknesses, but these are compensated by the staging and the strong ensemble. All in all, thrilling crime thriller entertainment is offered here, which lovers of exciting food from the far north should not miss. Worth seeing!

Picture + sound: The series thrives on the visual contrasts between the locations Stockholm and Marseille. Accordingly, the colouring also plays an important role. On the DVD, this leaves a positive impression, as does the overall sharpness, which is a little above TV level in the close-ups. The Dolby Digital 5.1 mix pleases with well mixed dialogues and some decent surround moments. Good!

Extras: Unfortunately, this season box does not have any bonus material to offer.

Fazit: The second season of "Springflut" tells another very exciting story. Since it's clear that the two cases have to be somehow connected, the viewer is especially excited about how the makers bring the two plot strands together. This may seem a bit constructed, but in the end it works really well and is really exciting up to the resolution. On three DVDs the 5 episodes in feature length are presented in good picture and sound quality. However, there are no additional extras. Those who like Nordic Noir are in very good hands here. Recommended!