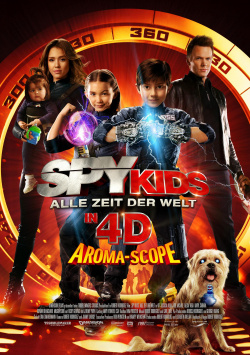 Spy Kids 4D - All the Time in the World

When Robert Rodriguez isn't busy with extremely bloody and violent stories like Sin City or From Dusk till Dawn, he lets loose in brightly colored action movies for kids. Whether it's Sharkboy and Lavagirl, The Secret of the Rainbow Stone, or the first three Spy Kids films, Rodriguez always tries to entertain little moviegoers with lots of infantile humor and extreme colorful gagets. And since his original Spy Kids just got too old for a new assignment, he's recruited two new kids for a fourth installment in the popular series, which sees their first adventure not just in 3D, but in 4D.

Once upon a time, Marissa Cortez Wilson (Jessica Alba) was a top spy. But now the new mother only wants to take care of her family. The fact that her two stiff children Rebecca (Rowan Blanchard) and Cecil (Mason Cook) do not necessarily make it easy for her does not make her really happy, but does not make her regret her decision. But when the mysterious villain Tick Tock shows up and threatens to steal time from the world, Marissa, who had already fought the crook once, must resume her duties. Too bad this is met with an attack on her family's home. Now Marissa finds herself forced to reveal the truth about her past as a spy to her stiff-necked children, only to have them flee to safety. Rebecca and Cecil are thrilled that their stiff mother isn't the uptight bore they thought she was. And so they are only too happy to agree to help Marissa fight Tick Tock - and they get help from a young woman who has already had a good experience with Spy Kids...

Spy Kids 4D, like its predecessors, is extremely colourful, highly silly and completely over-the-top. This works quite well in some moments and provides a really good laugh or two. Especially Argonaut, the chatty robot dog, or the still extremely powerful Marissa, even with a baby on her arm, make for a really good laugh. When the agent beats up a few bad guys on the side while changing diapers, it's not just younger viewers who will be able to laugh. Also the appearance of the former Spy Kids Alexa Vega and Daryl Sabara belongs to the worth seeing moments of this sequel.

But otherwise the humor moves throughout on a very infantile level, which is also underlined by the great 4D effect. Because in addition to the usual 3D glasses, the audience is also handed scent cards to sniff as soon as a certain symbol is seen on the screen. Apart from the fact that almost all of the eight fields smell the same, no matter if it's baby vomit or colourful sweets, the whole thing might be quite a nice gimmick for kids. However, it doesn't make the film any better.

Spy Kids 4D is neither the worst installment in the series, nor the worst children's film Robert Rodriguez has directed to date. Sharkboy and Lavagirl and The Secret of the Rainbow Stone were considerably less entertaining. But the occasional really good ideas and successful laughs that the action fun has to offer are unfortunately drowned in a jumble of silliness and squeaky-clean overacting, so it's hard to recommend the film - even if kids will certainly have great fun with some of the gags!