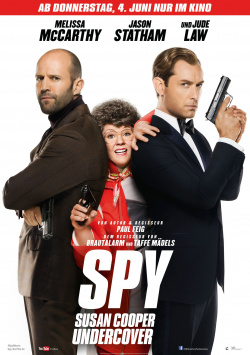 A dangerous weapon has fallen into the wrong hands and could cost many people their lives. The only one who knows where the weapon is is Rayna Boyanov (Rose Byrne), the stone-cold daughter of a recently deceased arms supplier. Too bad Rayna has just taken out top agent Bradley Fine (Jude Law), revealing that she knows the identity of all the CIA agents undercover. Therefore, someone must be found who has had the necessary training, but who the nasty Rayna doesn't know. Against all better sense, CIA boss Crocker (Allison Janney) decides to send the unassuming Susan Cooper (Melissa McCarthy) from her desk to the front lines. Observed by Special Agent Rick Ford (Jason Statham), Susan is to make contact with Rayna and locate the location of the bomb. It's a mission Susan doesn't really trust anyone with. And after she quickly causes a lot of chaos on her first undercover mission, all fears seem to be confirmed. But Susan Cooper has a few surprises in store for her superiors as well as her enemies...

Spy - Susan Cooper Undercover is the third - and with Ghostbusters in the pipeline, not the last - collaboration so far between director Paul Feig and Melissa McCarthy. After playing rather chavvy characters in Bridesmaids and Tough Girls, which also seemed to have become her trademark in other films like Totally Ripped Off or Tammy, she gets to strike a slightly different note here. At the same time, in grey-mouse-mode, she provides for some somewhat cramped foreign-shame-moments at the beginning, which, despite the wonderful beginning in best James Bond manner, don't let us expect much good. But fortunately these scenes are not representative of the rest of the film.

Because once Susan Cooper embarks on her mission, the whole thing turns into a really funny agent parody with lots of really good laughs. Of course, there are some scenes that overshoot the mark and draw their humor more from the lower drawers. But overall the gags work really well, no matter if it's pure slapstick, humorous action or smart wordplay. The film doesn't just benefit from its enjoyably biting underlying tone. Above all, it is the good-humoured ensemble that makes the fun of this comedy soar.

It is not McCarthy or her British colleague Miranda Hart (Miranda) who make a particular impression here. Rather, it's Jude Law as an allergy-plagued Bond knockoff, Rose Byrne as an icy, arrogant arms dealer, or Allison Janney as a completely unnerved CIA chief who provide some of the best laughs. The secret star of the film, however, is Jason Statham, who not only takes his own image for a ride, but generally reveals a comedic talent that you wouldn't have expected from him. He is still a damn cool guy even when he makes a fool of himself. He embodies exactly the mixture that makes the movie work so well.

Because Spy - Susan Cooper Undercover isn't just a completely silly comedy, but also a really decent agent thriller with some good action sequences. These are also a bit over the top, but are really well choreographed and directed. In the end, all of this leads to the conclusion that Paul Feig has delivered his best and funniest film to date here, one that at least somewhat alleviates the major doubts about his female Ghostbusters reboot. It's a very big fun movie that turns out to be as silly as it is clever, as crude as it is irreverent, and as fast-paced as it is punchline-rich. And for that there is a very clear: Absolutely worth seeing!