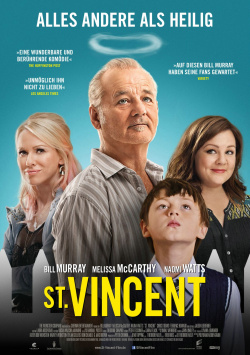 Vincent (Bill Murray) is not exactly a dream neighbor. The old gentleman is extremely grumpy, constantly drunk, has regular visits from pregnant stripper Daka (Naomi Watts) and the curmudgeon with a penchant for horse betting has apparently never heard of gardening either. So Vincent isn't exactly a person you want your kid to be around. And so single parent Maggie (Melissa McCarthy) isn't at all thrilled about the idea of Vincent, of all people, looking after her 12-year-old son Oliver (Jaeden Lieberher). But she has no choice, because if she doesn't want to lose custody of the boy, she has to hold her own in her new job. And the only way to do that is to have someone take care of Oliver after school. But in her worst nightmares, Maggie never imagined that the retiree would be guiding her darling son through life's tough school in bars, strip clubs or the racetrack - laying the foundation for a most unusual friendship.

For his feature debut, St. Vincent, director and screenwriter Ted Melfi drew inspiration from a very personal story. After his brother died when he was only 38, Melfi and his wife adopted his 11-year-old daughter, who otherwise would have had to be placed in a home. Then, when the girl had to write an essay in her school about a saint and people who represented him in real life, she chose St. William of Rochester, the patron saint of adopted children, and Melfi to represent him. The filmmaker was so moved by this, and he quickly became convinced that this story would be perfect for a movie subject.

Fortunately, in writing the screenplay, he resisted the temptation to concoct a maudlin drama out of the material. Rather, his personal experience served as the basis for a wonderfully quirky comedy that at first seems strongly reminiscent of Nick Hornby's About a Boy. But while the parallels between the two stories can't be dismissed, Melfi's film ultimately possesses its own unique character. This one finds the perfect balance between comedy and drama, between humor and emotion, so that in the end a magical feel-good film has emerged that offers Bill Murray a real parade role.

For the curmudgeonly pensioner with the good heart, Murray is simply the perfect casting. As badly as Vincent behaves, thanks to Murray's performance you quickly take him into your heart as an audience member. You realize what Oliver sees in the old man and why he finds a way into life through him, which has been denied to him so far. This might sound a bit maudlin, and maybe it would be, if Melfi didn't always include some wonderfully irreverent and sometimes a bit mischievous humor in the story, which almost nips any kind of kitsch in the bud. He then fails to do so in the not exactly original finale, but since this too is extremely charmingly realized and is really the only somewhat gritty scene in the film, one is only too happy to forgive him for it.

There is no question that Bill Murray carries the film. He makes St. Vincent a genuine delight every second of the way. But his co-stars also do their thing really well. Naomi Watts gives the sometimes painfully honest lady of the night with a wonderful coldness, while Melissa McCarthy almost completely pulls her game back and finally shows once again that she can do more than play grimacing trash queens. The biggest discovery, however, is newcomer Jaeden Lieberher, who comes across as very natural and unspent. The boy provides the perfect counterbalance to Murray's misanthrope without coming across as too forcedly cute or precocious.

St. Vincent is a charming little film that, while not without its flaws, ends up spreading so much good cheer that any small flaws are instantly forgotten. In the end, the satisfied smiles on the audience's faces dominate over any slightly tired gag and ensure that there is only one permissible conclusion for this comedy: Absolutely worth seeing!