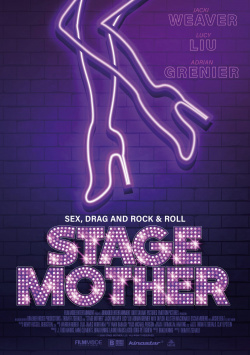 Maybelline (Jacki Weaver), a conservative Texas choir director, is devastated: her son, with whom she has had no contact for years, has died after overdosing. Against her husband's wishes, Maybelline travels to San Francisco, where her son lived as a successful drag queen, for the funeral. From his partner and business associate Nathan (Adrian Grenier), the elderly Southern lady learns that she has inherited her son's drag club. Although she couldn't accept her son's lifestyle, she's now unwilling to give up his life's work. She wants to save the club from financial ruin with the help of the drag queens and also Nathan. This doesn't just change Maybelline's view of her son. She also sees her own life - and what she has left of it - with completely different eyes.

So, let's cut to the chase: anyone who takes "Stage Mother" as anything other than a colorful cinematic fairy tale will probably have little to do with the tragicomedy. On the contrary, one could even accuse the film of being extremely detached from reality and of a certain mendacity. As I said, that would be the verdict if Thom Fitzgerald's film had any documentary pretensions or if it were a drama striving for authenticity. It isn't, however. "Stage Mother" is a classic feel-good movie that exaggerates in order to entertain its audience well and convey certain emotions.

Of course, there's a message hidden behind it all: the film is a paean to tolerance. If you close your mind to it, you might also miss out on the joy of life. Maybelline - wonderfully played by Jacki Weaver - will probably never be able to forgive herself for losing contact with her son after his outing. But unlike her husband, who lives a life of bitterness, she is willing to open her heart to people who live a different lifestyle than you do. Yes, this is perhaps a little naive and sadly, sadly drawn far from reality. But it is heartwarming, partly amusing and throughout life-affirming told - and there is now really nothing to complain about despite quite a few clichés and stereotypical character drawing.

Up to the supporting roles "Stage Mother" is really well cast with Lucy Liu, Adrian Grenier ("Entourage"), Mya Taylor ("Tangerine L.A.") and drag superstar Jackie Beat. This contributes greatly to the very positive overall impression. Sure, the film is no masterpiece and it certainly won't win any big awards. But for a few really nice feel-good moments it is just the right thing. For those who don't expect more, it's clearly worth seeing!