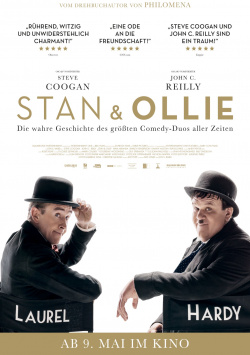 They were once the most popular comedy duo in the world: Stan Laurel (Steve Coogan) and Oliver Hardy (John C. Reilly), wowed moviegoers in over 100 films. But by the early 1950s, not much of that fame remained. A new film is on the horizon, but unlike in the past, the two have to fight for new role offers. And on their tour through Great Britain most of the seats in far too small halls remain empty. But Laurel and Hardy have a special talent for making people laugh. When they reignite that spark, the audiences come back too and the tour becomes a success after all. But a dark shadow still hovers over it all, one that could destroy the two men's friendship forever.

With Stan & Ollie, director Jon S. Baird pays tribute to two people who have made generations of people laugh with their flair for comedic timing and their courage for utterly silly slapstick. What makes the film so successful is that it's not a classic biopic, but the story is told from a time when the really big success has already passed. Thus, the friendship between the two men, who are very dissimilar in themselves, can be put in the center, which gives especially the last act a great emotionality.

Although the script has some wonderful dialogues to offer, there are definitely some clichés to see, which you know from countless artist biographies. But this hardly dulls the overall positive impression. What's the reason for that? Clearly to the two main actors, who come very close to the immortal originals not only through the outstanding work of the make-up artists, but also through the perfectly nuanced acting. John C. Reilly and Steve Coogan actually disappear completely behind their roles, managing to bring the beloved comedic duo to life once again. They are not only convincing in the scenes in which the two make people laugh with their numbers. Also in the quieter, character-oriented moments, the actors really deliver great.

Stan & Ollie admittedly does not reinvent the wheel, but in the end is simply a wonderful and very entertaining film about a very special friendship. Great acting, light hearted yet directed with depth and movingly told - there just has to be an Absolutely Worth Seeing for this.