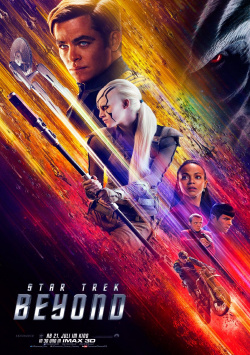 The Enterprise and its crew have been pushing deeper and deeper into the far reaches of the galaxy for three years now, exploring strange worlds and forging new alliances. It's been an exhausting, grueling three years that have Captain Kirk (Chris Pine) doubting whether he's the right man for such missions. When they stop off at a Federation space station, Kirk is convinced he wants to give up his post to Spock (Zachary Quinto). But before that can happen, the Enterprise is called away on a risky rescue mission. Soon all other problems and doubts fade into the background, as the crew of the Enterprise gets to deal with an enemy that has such powerful weapons that it seems to seal not only the fate of the Enterprise, but also of the entire Federation.

With Star Trek Beyond, J.J. Abrams passes the directorial baton to Fast & Furious director Justin Lin. After successfully reviving the beloved franchise, Abrams has departed for Star Wars after two films and will only serve as a producer from here on out. While Lin stays on the path set by Abrams, he also puts his own stamp on the whole thing, which is especially noticeable in the action sequences. For his debut in the world of Kirk, Spock and Co. he had a script at his disposal, for which none other than Scotty aka Simon Pegg was responsible together with Doug Jung. The script is peppered with affectionate allusions to the classic series, but also spices up the story again and again with a pleasant pinch of dry humor. For viewers who only know the new films, this can sometimes come across as a bit overdrawn or even trashy. Die-hard fans, on the other hand, will be pleased to know that the film - in keeping with the franchise's 50th anniversary - skillfully mixes the new with the old, making it a very nice love letter to the entire Star Trek universe.

This has great entertainment value, but also some weaknesses. Krall isn't a particularly good villain, especially since it's almost sacrilegious that Idris Elba has been rendered unrecognizable under a mask and that his inherently cool voice has also been completely alienated. True, he does pose a serious threat to our heroes, which also makes for some good moments of suspense. But somehow he's one of the aspects of the movie that you'll forget the quickest. Dramaturgically, there are also some small lengths and such scenes where it becomes clear that Justin Lin can direct good action, but not necessarily powerful character moments.

What he does pull off very well, however, is a nice nod to the great Leonard Nimoy, who made Spock the cult icon that the character remains to this day. But it's not just this moment that gives fans a little lump in their throat. The fact that this film marks the final appearance of Anton Yelchin as Pavel Chekov, who passed away far too soon a few weeks ago, also makes for some wistfulness. It's nice that Chekov's role is a bit larger than it was in the last two films. It's a worthy send-off for a genuinely talented young actor who was completely unnecessarily snatched from existence far too soon.

Some very good effects, gripping action sequences, nice references for fans, and a few genuinely funny moments make Star Trek Beyond almost a slam dunk - at least for fans of this new crew. Even if it comes off weaker in direct comparison to the first Abrams movie and is just on the level of Star Trek Into Darkness, the positive aspects of this new adventure of the Enterprise crew are strong enough to make a very positive overall impression. And even if especially towards the end some clichés are served, you already get a great desire for the next movie. This has already been confirmed and will once again play with the theme of time travel - so that Kirk's actually dead father, played by Chris Hemsworth, may appear again. We are curious. But until it is so far, applies for Star Trek Beyond: For fans a must, for all others with small deductions worth seeing

Cinema trailer for the movie "Star Trek Beyond (USA 2016)"
Loading the player ...