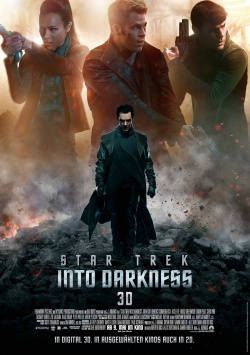 Four long years after their last cinematic outing, the crew of the Enterprise finally ventures once again into galaxies never before seen by man. Under the renewed direction of J.J. Abrams, who successfully ushered in the new Star Trek era in 2009, Chris Pine, Zachary Quinto and co. now get to prove for a second time that they can fill the outsized shoes of their legendary predecessors with absolute dignity and conviction. And Abrams shows once again that it's entirely possible to blend the spirit of the old series with contemporary action and cutting-edge technology in such a way that Star Trek fans old and new are more than well served.

In Star Trek Into Darkness, Captain James T. Kirk (Chris Pine) faces considerable trouble after breaking all regulations on a mission to a primitive planet to save Spock's (Zachary Quinto) life. Instead of showing gratitude, the Vulcan stabbed him in the back and Kirk lost command of the Enterprise. Now he is to serve again as first officer under his former captain, Pike (Bruce Greenwood). But anger at this punishment is soon completely eclipsed when there is a horrific terrorist attack on a Starfleet facility in London. Behind the attack is a man from within their own ranks: the mysterious John Harrison (Benedict Cumberbatch) has only just begun his one-man war against Starfleet with the deadly explosion. After another attack that claims more victims, Harrison manages to escape to the Klingons' home planet. Kirk is given the mission to track down Harrison and kill him. A mission he is only too happy to accept. But once on Kronos, the story takes a crucial turn.

It is extremely difficult to review Star Trek Into Darkness without giving away some of the secrets well kept by Abrams and his team, or the many pleasant surprises. Without going into too much detail, however, it can be said that the future Star Wars director has perfectly managed to direct a film that can be enjoyed without any prior knowledge (although you should have already seen his first Star Trek film), but at the same time keeps giving loyal fans wonderful little gifts. Those familiar with the original series and the first theatrical films will be able to enjoy this twelfth flight of the Enterprise across cinema screens much more intensely than such viewers, for whom Abrams` films are their maiden flight into the far reaches of space. Nevertheless, Star Trek Into Darkness is not a film just for fans, but actually for everyone who loves excellent sci-fi adventures.

This is due to the fact that Abrams does not just string together allusions to the old adventures of Kirk and Co, but simply incorporates them into his own unique mix of action, humor and suspense. Once again, he makes sure that his characters are not overwhelmed by the breathtaking effects. Again and again he gives them enough space and wonderfully written scenes to develop and to grow to the audience's heart. This is where the good hand the creators have shown in casting the crew and supporting characters especially pays off.

Chris Pine once again shows that he is truly perfectly cast as go-getter Kirk, who becomes a hot-blooded charmer at the sight of a beautiful woman (no matter the species) while confronting his enemies with convincing toughness and stubborn determination. The fears of many fans that he wouldn't be able to do justice to this character made iconic by William Shatner, he may have finally disproved with this second film. And also Zachary Quinto leaves a very positive impression as Spock, which he can convincingly maintain both in the quieter or more humorous, but also in the action-heavy scenes. With Benedict Cumberbatch (Sherlock) as the antagonist, the makers have managed a very special coup. Because even if Cumberbatch doesn't look particularly threatening at first glance, he manages to become a more than convincing and believably dangerous villain through his extremely intense acting, through which the already very good film gains even more quality and show value. What Cumberbatch brings out of this role is just great and contributes significantly to the fact that this part is still far superior to its successful predecessor.

It is also very nice that despite all the action, explosions and fights the actually very peace-focused basic idea of the series is taken up in a very nice scene between Captain Kirk and the chief engineer Scotty, once again wonderfully embodied by Simon Pegg. Scotty becomes the mouthpiece for series creator Gene Roddenberry, who always saw the Enterprise as a reconnaissance ship and not a warship. At the same time just this scene clarifies the connection between old and new, which J.J. Abrams has implemented so successfully.

If there is something about which it could be said perhaps a little critical, then that would be the 3D effect, which proves despite some nice moments here again as actually completely unnecessary. The film gains absolutely nothing from the additional dimension, in some scenes the wearing of 3D glasses even has the negative effect of darkening the already gloomy visuals, whereby smaller details are lost.

But apart from that Star Trek Into Darkness is great entertainment cinema, just as it should be: a thrilling story, lovable characters, a great villain, great effects and several moments in which the fans' heart swells. Certainly, this won't satisfy all long-time fans. Nevertheless, J.J. Abrams has to be acknowledged that he obviously made an effort not only to win new fans and to pull money out of the pockets of the youngest possible target audience, but also to please those viewers whose hearts have been attached to the Star Trek universe for years. And for this achievement there is only one possible rating: absolutely worth seeing!!!

Cinema trailer for the movie "Star Trek Into Darkness (USA 2010)"
Loading the player ...