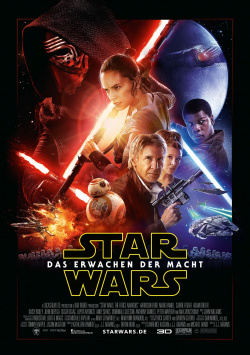 The time has come again: fans of the Star Wars saga can finally travel far, far away galaxy back. Few films have been as eagerly anticipated in recent years as Star Wars: Episode VII - The Force Awakens. Since the announcement that the actors from the original (and for many the only true) trilogy would be back, and at the latest after the really great main trailer, the anticipation knows no bounds. Although the marketing machinery of this movie is quite absurd and the Star Wars logo seems to be slapped on everything, no matter if it has something to do with the movie or not, the enthusiasm of the fans is not affected. But so much anticipation naturally raises expectations extremely high, and so the question arises: can the film ever live up to them.

From the story, director J.J. Abrams (Star Trek, Lost) has made a big secret until the very end. And even though there are many newspapers and online magazines giving away all the surprises, not too much should be said about the plot at this point. Because that would detract a little from the very special cinematic experience that this chapter of the Star Wars saga offers. This, however, can be said: Thirty years have passed since the Rebels' victory against the Empire. Luke Skywalker (Mark Hamill), the last of the Jedi Knights, has been missing for many years. In his absence, the First Order has been able to rise from the ashes of the Empire, intent on destroying the Resistance once and for all. To prevent this, General Leia Organa (Carrie Fisher), the leader of the Resistance, desperately searches for her brother. She sends her best pilot, Poe Dameron (Oscar Isaac), to the planet Jakku to secure vital information on the Jedi Knight's whereabouts. But before Poe can get this vital data back to Leia, he's captured by Kylo Ren (Adam Driver) and his stormtroopers - though not before entrusting the information to the little droid BB-8, who shortly thereafter falls into the hands of loner Rey (Daisy Ridley). Together with the fugitive Finn (John Boyega), whom she believes to be a member of the Resistance, Rey plans to take BB-8 to the Rebel base. And thus begins the next chapter in the battle against the Dark Side of the Force.

J.J. Abrams is a huge fan of the old Star Wars movies. That was part of the reason he didn't want to do Episode VII at first. He didn't want to ruin for himself the special place those films hold in his life. But thankfully he did get persuaded, because Abrams managed to do what George Lucas unfortunately failed to do with his prequel trilogy. In his quest to direct the technically perfect Star Wars film, Lucas had completely lost sight of the characters and everything that made the original trilogy so charming. Episode I - III are great entertainment cinema with great visuals. But they are also very sterile, woodenly acted movies that unfortunately take themselves way too seriously. This worked very well in some action sequences in particular, but at other moments it annoyed or even bored diehard fans.

Abrams has now gone back to basics. He shot on real locations and on real sets as often as he could, and also worked a lot with animatronic puppets and masks. This makes the world tangible and doesn't give it that studio feeling that is inherent in many green screen scenes from Episode I - III. Which is not to say that Episode VII doesn't use CGI effects galore. But it's the mix of traditional methods and modern technology that makes this return to the Star Wars universe so successful. The same goes for the characters and their actors. Again, Abrams uses a good mix of old and new. While most of the familiar characters make very small appearances, Han Solo aka Harrison Ford is one of the very big stars of the film. Ford brings this incredibly popular character to life with an ease as if the three decade hiatus hadn't even happened. But he also adds a few new facets to Han Solo. After all, the years have not passed him by without leaving a mark. And one event in particular has left a lasting mark on him - which, of course, will not be revealed here.

But the new cast, led by Daisy Ridley, John Boyega, Oscar Isaac and Adam Driver, can also convince in every respect. However, this is also due to the script, which makes them much more than stenciled clichés. Another positive aspect of the production especially comes into play here: the humor! Abrams and Lawrence Kasdan, who previously penned the scripts for The Empire Strikes Back and Return of the Jedi, imbue their characters with a humanity through sometimes extremely funny (but never flat) dialogue that Anakin, Padme, or Qui-Gon Jinn simply lacked. These new characters are equal successors to Leia, Han, and Luke, and even during this film, one looks forward to spending more time with these characters in the future.

Of course, cynics and constant complainers could find a lot to dislike about The Force Awakens. Granted, there are a lot of parallels, especially to Episode IV, so much so that the film could almost be called a remake. And yes, the makers play it safe dramaturgically, giving old and new fans alike exactly what they want to see. But it's how they do this that counts. Here, the film exudes from every pore a passion that may be paired with calculation, but that allows fans of the old films in particular to once again feel that very special sense of wonder and amazement that you experienced as a child - or even as an adult in the late 70s and early 80s at the movies. J.J. Abrams brings back the magic to cinema that many blockbusters of today simply lack. And for that, one can only be grateful.

Although Star Wars: Episode VII - The Force Awakens is not perfect and may not be the best installment of the series, it has become exactly the film fans have been hoping for. It's a spectacle to behold, extremely engaging entertainment cinema with great effects, good actors, a new droid to fall in love with, a very interesting villain (who I've deliberately said as little about as possible), some very funny moments but also some emotional goosebump scenes and a great new score by John Williams. If you want to discover the child in you once again and if you allow yourself to dive into strange worlds in the cinema and can turn off the unfortunately very present cynicism for two hours, you will get some very, very great cinema here. For this, there is clearly a: Absolutely and definitely worth seeing!!!