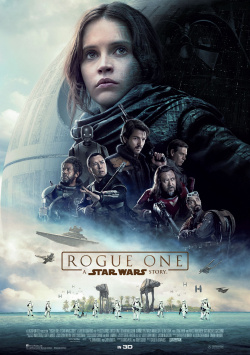 For Star Wars fans, a golden era began last December. If they once had to wait many years and even decades for a new adventure from a galaxy far away, there is now a new part of the star saga in the annual rhythm. The plan is to continue the actual story every two years and in the other years to bring films that are set in the same universe, but otherwise stand alone. So fans can look forward to a film about the adventures of the young Han Solo or with bounty hunter Boba Fett through space. But now Rogue One kicks things off, taking place just before the events of the very first Star Wars film - that is, just before Episode IV.

Told is the story of a group of rebels who learn that the Empire is working on a new superweapon. A genius scientist has been forced to design this weapon, called the Death Star, for the Emperor and his minions. But plagued by his conscience, he has built in a small flaw that only his daughter, the young rebel Jyn Erso (Felicity Jones), will recognize as such. Should Jyn and her small band of mercenaries manage to get their hands on the Death Star plans, there might still be a small chance in the fight against the Empire.

Without the familiar fanfare and scriptural tapestry at the beginning, Rogue One doesn't really seem like a typical Star Wars movie in the first few moments. But director Gareth Edwards (Monsters, Godzilla) and the writing team of Chris Weitz and Tony Gilroy have pulled off a real feat. They've created a film that has just enough Star Wars to send fans into raptures (there's a sequence towards the end, for instance, that's just epic, especially for fans of the first hour!), but at the same time breaks away from the saga's usual narrative patterns enough to function as a standalone work. The same goes for Michael Giacchino's score, which is a good mix of quotes from the John Williams themes and new, original tunes. On all levels, new meets old Star Wars feel here - and that's exactly what these standalone films were meant to achieve.

One of Rogue One's very big strengths is the imagery. Edwards conjures up some things on screen here that will put an ever-widening smile on your face as a fan. Visually, Rogue One is truly beyond reproach. But also the story, which is actually very simple at its core, has at least a few surprises to offer, through which the Star Wars universe is enriched quite. Moreover, the makers managed to keep the troop around Jyn and Cassian Andor (Diego Luna) from degenerating into one-dimensional clichés. One feels for these characters and even if every fan knows the outcome of their mission, the good character drawing helps a lot to keep the tension and emotionality of the story on a very high level until the end.

There are also a few small weaknesses - so two characters that have been rejuvenated or brought back to life by CGI, respectively, look a little bit different. two characters, who were rejuvenated or brought back to life by CGI, look a bit too artificial - but first and foremost Rogue One is exactly what you want to see as a fan: There are great space battles, a little bit of humor, an exciting story, great effects (which were not only created on the computer) and very successful allusions to the classic trilogy. In addition, after his production finds its pace after a somewhat bumpy beginning, Edwards gives the story and its characters enough room to unfold. While Rogue One has a tremendous amount of effects and action to offer, it never loses sight of what made the old Star Wars films in particular so successful. In short: This Star Wars story is a feast for fans, an exciting space adventure with many highlights and a great consequent finale. Absolutely worth seeing!!!