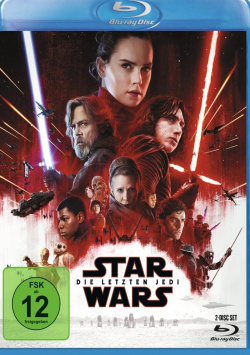 Film: It's a good time to be a Star Wars fan. There will be a new movie every year for some time, there will be more and better merchandising and even a live action TV series is announced. Despite this ever-increasing range, which also includes novels and games, it is always a special experience when the Lucasfilm logo appears on the screen, followed by the words: "Once upon a time a long time ago in a far, far away galaxy…". It's an experience that fans are looking forward to for months on end, accompanied by expectations that will hopefully be fulfilled again this time.

Then it can happen that this expectation is too great to be fulfilled. Small things that might otherwise not even be noticed become real disruptive factors and everything that is not absolutely perfect may be criticized a little too much. Especially for real fans - and as such I would definitely call myself - it is difficult to maintain the necessary objectivity. And that's exactly the reason why I would describe "Star Wars: The Last Jedi" as a very good, sometimes even great "Star Wars" movie, which leaves a strangely unsatisfying feeling at some points.

The story isn't really profound. The First Order under their supreme leader Snoke (Andy Serkis) becomes more powerful and spreads more and more in the galaxy, while the New Republic is more and more repressed. Only a small group of rebels, led by Leia Organa (Carrie Fisher), have been able to stand firm against Snoke and his troops so far - always hoping that Rey (Daisy Ridley) will succeed in finding Luke Skywalker (Mark Hamill) and persuading him to join the battle and bring new hope to the galaxy. But time is running out, because the First Order is close on the heels of the few remaining ships of the New Republic. While Rey tries to lure the last Jedi out of his self-imposed isolation, Finn (John Boyega) and Poe Dameron (Oscar Isaac) set out to implement a dangerous plan in order to escape Snoke and build up a new rebel alliance…

More should not be betrayed under any circumstances, because in the course of the film there are some small, but also big surprises that shouldn't be spoiled for any viewer. So I'd rather get straight to the point: Why does the film leave a somewhat disappointing impression at times? J.J. Abrams was criticized by some fans for the fact that his film had too few ideas of its own to offer and in principle retells the story of the original trilogy. Even though this point of criticism is not entirely unfounded, at least in places, it is also the reason why "The Awakening of Power" was so successful: unlike the unloved prequels, Abrams has spread a warm blanket of nostalgia over the fans with his film and has given them exactly what they have longed for so many years.

Rian Johnson now has the somewhat more difficult task of satisfying the needs of the fans on the one hand and steering the whole thing in a new direction on the other. Even more than its predecessor, this film is a season handover to the next generation. Johnson tries a mixture of old and new and unfortunately doesn't always hit the right note. If he succeeds, it creates some great moments. Mark Hamill is simply great and even Carrie Fisher, who died a few months ago, delivers some really wonderful scenes. But not only the old houses, also the "newcomers" - especially Daisy Ridley as Rey and Adam Driver as Kylo Ren - play really well.

This helps to cover some dramaturgical weaknesses very well. But in some scenes neither the great effects nor the good actors help. Especially when it comes to humor, but also in a very emotional scene, the tone doesn't quite fit to what "Star Wars" is all about. And even a scene playing on a casino planet may not be very convincing, as it contributes relatively little to the actual story, but is far too long in the making. To deepen all this further would mean to have to betray too much - especially with regard to the indicated emotional moment. That can, however, be said: These points of criticism sometimes stand out very clearly and perhaps also cloud the overall impression a little bit. But objectively speaking, they're not really serious enough to really disturb the enjoyment of the movie.

It is also quite clear that the positive aspects are clearly in the majority. There are two or three scenes that can confidently be counted among the highlights of the entire series. And also the fact that Johnson succeeds perfectly in playing with the expectations of the fans, especially in two scenes, only to then take a completely unexpected direction, easily outweighs many of the weaknesses. If the very last, really unnecessary scene had been omitted, the actually perfect finale would have torn out many a thing. But with this short epilogue sequence, the viewer is once again reminded that the film hasn't quite become the masterpiece that many had hoped for. Nevertheless, "Star Wars: The Last Jedi" has become a celebration for fans.

And that's why the bottom line is very clear: Absolutely worth seeing! One can already be curious to see how J.J. Abrams will bring this trilogy to a close in two years! May the power be with him…

Picture + Sound: The Blu-ray offers the film exactly in the quality you might expect: the picture is absolutely clean and has a very high image sharpness, which is especially evident in the brighter shots. Also the 2D version pleases with a pleasant image depth, colors and black values are very well tuned. The sound is in a very powerful Dolby Digital Plus 7.1 mix, which can unfold its full potential especially in scenes like the Battle of Crait or the opening space battle. Very good.

Extras: Here the Blu-ray can score correctly. Because the bonus material is really great! We start with an audio commentary by Rian Johnson. You can tell from the commentary how much passion he put into the film. And even if fans don't like all of his creative decisions, it's very interesting to know what the intentions are. Therefore the commentary is absolutely worth listening to, not only for fans who really like the movie.

We continue with 14 edited scenes, which can optionally be viewed with an explanatory commentary. (approx. 23:32 min.). An alternatively cut beginning and a very amusing scene on the island to which Luke has retired are the highlights of this collection. Otherwise, scenes with Finn and Rose dominate the action. Worth seeing, even if the effects were not finished.

The best extra on the bonus disc follows: The 91-minute documentary "The Director and the Jedi". The high quality produced documentary offers a lot of great shots from the shooting, but is also pleasantly honest, for example when it comes to the fact that Mark Hamill wasn't happy about how Rian Johnson developed the character of Luke Skywalker. A really great documentary that can be warmly recommended to every Star Wars fan.

There are other short documentaries dealing with the "balance of power" (ca. 10:14 min.), the creation of the space battle (ca. 14:20 min.), the top leader Snoke (ca. 5:37 min.), as well as the showdown at Crait (ca. 12:54 min.). The final extra shows the motion capture performance of Andy Serkis, before he was transformed into Snoke on the computer (approx. 5:46 min.). It is nice that his performance is fully appreciated in this way.

Fazit: Yes, "Star Wars: The Last Jedi" has some weaknesses. Some really blatant even. But the movie also has some really great moments to offer, which make up for many of the weaknesses. The Blu-ray convinces with a very good picture and sound quality and has a lot of really good extras to offer - first of all an excellent Making of Documentation. absolutely recommended!