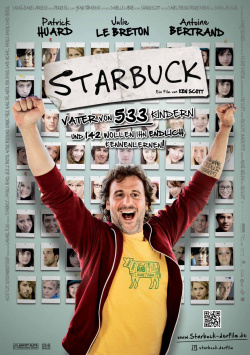 David Wozniak (Patrick Huard) is already 42 years old, but he just can't get comfortable with growing up. He's as dispassionate about his job as a delivery man for his father's butcher shop as he is about trying to make a few bucks on the side with a small marijuana plantation in his living room. It's no wonder his girlfriend Valérie (Julie Le Breton) ditches the utterly unreliable David when she learns she's expecting his child. But an unexpected opportunity to practice being a father opens up for David when he learns that his regular sperm donations, which earned him plenty of money between 1990 and 92, have borne fruit. Because due to an error, the clinic only used his donations during that period. And so David is suddenly the father of 533 children. Although David's identity has been protected until now, 142 of the children have banded together to use a class action lawsuit to learn the identity of their genetic donor. Against his lawyer's advice, David is quite interested in learning who the young people carrying his genes are. But when he begins to take a peek into his children's lives, his own is finally thrown off course...

Starbuck is a charming French-Canadian comedy that tells its endearing story in a very low-key, sympathetic way. Director Ken Scott, who is currently directing the U.S. remake of his 2003 comedy The Great Seduction, had initially planned to have David have only 150 children - a number that actually seemed unrealistically high to him. But then he and his co-writer Martin Petit came across the story of a sperm donor who had actually fathered 500 children. And so David was then allowed to become the father of 533 offspring. Of course, even though their story makes use of some elements of reality, overall it is purely a cinematic tale. The way David secretly integrates himself into the lives of the children who are interested in his identity is very amusing and even touching at times, but it's also very exaggerated in order to get a few good laughs or just a happy smile on the audience's faces. And since this works out very well, all the dramaturgical and cinematic liberties the film takes are perfectly fine.

However, the whole thing smokes a bit to get to the point where the film really works well. The beginning seems a bit tough, some gags try hard and the characters are also still quite superficial. But after the bumpy beginning Starbuck quickly turns into a feel-good movie, which could easily become one of the big insider tips of the cinema summer 2012.

Sure, at the end the whole thing seems a little thick and the morally valuable ending could even be called a little cheesy. But the way Ken Scott conveys the moral of his story is just endearing and worth watching. This is also due to the main actor Patrick Huard, who makes the lovable loser David still seem sympathetic even in those moments when he acts like a complete moron. This makes especially the finale more emotionally convincing, which ultimately leads to the fact that the audience will leave the cinema with a lot of sunshine in their hearts. And for this, despite minor weaknesses and comedic hangs, there is still a deserved: absolutely worth seeing

Cinema trailer for the movie "Starbuck (Kanada 2011)"
Loading the player ...