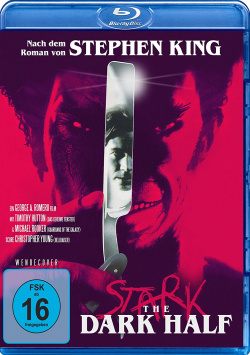 Stark - The Dark Half - Blu-ray

Film: Under the name George Stark, respected writer Thad Beaumont (Timothy Hutton) regularly makes it to the top of the bestseller lists with his horror novels. Hardly anyone knows that he is behind the pseudonym. But that could change when a blackmailer threatens to expose the true identity of George Stark. Beaumont decides not to be blackmailed and to go public himself. At the same time, he wants to use the opportunity to bury George Stark for good. But then something unbelievable happens: the writer's alter ego takes physical form and begins to murder cruelly. And everything points to Thad as the killer.

Stark - The Dark Half is one of the more accomplished film adaptations of a Stephen King novel. As often in his works, King processed his own experiences here. To see if his books would sell without the Stephen King name, he published some works under the name Richard Bachman. After it became known that Bachman was King, these novels again shot to the top of the international bestseller lists. In the novel published in 1989, King dealt with the discovery of his pseudonym in his typical way - as a perfect mixture of horror and psychological thriller. For the film adaptation could be won only one year later George A. Romero, who was like King himself also an icon of the horror genre.

Due to the fact that the producing studio ran into financial difficulties, the film was first packed into the archives after its completion and only made it to theaters in 1993. The uncut version ended up on the index in Germany in 1994 and was only removed from there in October 2017. In the meantime, this version is even released from 16 years and now finally available again everywhere.

The film does have some minor flaws and doesn't fully capture the potential of the book. But the very good acting of Timothy Hutton - especially as George Stark - and supporting actors like Michael Rooker quickly make up for some of these weaknesses. In addition, you notice the production that with the sadly deceased last year Romero a real master of his craft sat in the director's chair. Despite a fairly low budget and not a few difficulties during production, the forefather of the zombie film has made a more than solid shocker, which can score with some well-executed shock moments and a great atmosphere.

And even though the whole thing is almost thirty years old, the movie still works really well! So all in all, a really good King adaptation that is absolutely worth seeing for all fans of the writer and of course for Romero fans!

Picture + Sound: The technical realization of the Blu-Ray is on a good level. The film can definitely see its age. However, a few blurs and minor smudges are quite tolerable given the powerful coloration and overall satisfactory overall sharpness. The audio is presented as a Linear PCM 2.0 mix, which allows dialogue in particular to ring out powerfully from the home theater speakers. For a film that's almost thirty years old, there's a satisfied: good!

Extras: As bonus material, the Blu-ray has two audio commentaries to offer. The first is recorded by George A. Romero. The 2017 sadly deceased cult director tells here usual open and unembellished about the filming, originally planned casts and about the financial problems of the studio. A commentary really worth hearing. The second comes from Kai Naumann and Marcus Stiglegger, who deliver a rather factual commentary, but which is absolutely recommended especially for fans interested in film history and film analysis.

In addition to the commentaries, there is also a really worth seeing, almost 30-minute making of documentary, which, like Romero's commentary refreshingly honest about the not always easy shooting. Absolutely worth seeing! In addition to the single Blu-ray, there is also a Deluxe Edition in the Media Book with Blu-ray and 2 DVDs. On it are even more extras such as Behind the Scenes footage and cut scenes to see.

Conclusion: Stark - The Dark Half is undoubtedly one of the better Stephen King adaptations. Horror master George A. Romero delivered a very atmospheric blend of psychological thriller and horror shocker that still works well today. The Blu-ray is technically well implemented, in the bonus material like Romero's audio commentary and the good making of. Absolutely recommendable!