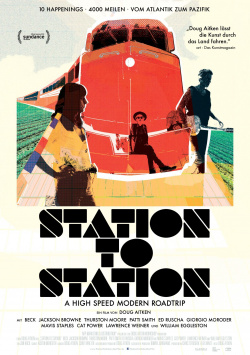 A train, 4,000 miles across America, 24 days, stopping at ten different stations. That's the starting point for a very special project by multimedia artist Doug Aitken. Taken on its own, this may not sound very spectacular. But if the train is populated with other artists and very special happenings are staged at the individual stations, and if 62 short films, each with a running time of one minute, are ultimately created, the whole thing becomes a very special work of video art that can now be enjoyed where it belongs: in the cinema! Station to Station offers a very special viewing experience on two levels. On the one hand, the whole thing is obviously an art project with an artificial character. On the other hand, this unusual journey through parts of the USA offers a very original, honest look at the country and its people.

At the same time, the film's 62 entries make it clear how differently viewers can feel about the length of a minute. For instance, there are chapters that offer such mesmerizing imagery or stirring musical performances that the 60 seconds fly by. And then there are some slightly bulkier shorts that feel significantly longer than just 1 minute. Sure, even these clips have their appeal and contribute to the interesting as well as rousing overall impression. Nevertheless, the varying quality - which is admittedly always in the eye of the beholder - is quite noticeable due to the varying perception of time.

Besides quite ordinary people and artists who are probably only known to true connoisseurs of the American art scene, the film also features artists known to a wider audience such as Beck, composer and producer Giorgio Moroder, singer Jackson Browne or singer-songwriter Cat Power. And also international artists like Swiss Urs Fischer, German conceptual artist Christian Jankowski or Brazilian Ernesto Neto make sure that this experimental film has become such a colourful kaleidoscope for eyes and ears.

You have to be able to get absolutely involved with this film. There is no narrative and hardly any cohesive elements. Rather, the viewer is treated to a collage of short clips that make this very unusual road trip across the US a very special experience for the senses. For art lovers, this is the perfect complement to a visit to the large Doug Aitken exhibition, which can be seen at the SCHIRN in Frankfurt until 27.09.2015. If, on the other hand, you expect a documentary in the classical sense, you will definitely be overwhelmed by this video artwork. Worth seeing

Cinema trailer for the movie "Station to Station (USA 2014)"
Loading the player ...