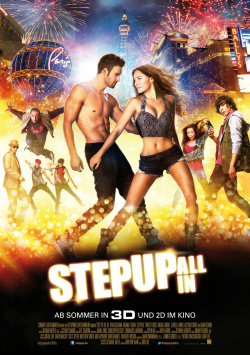 Step Up: All in

The happy ending didn't last long for Sean (Ryan Guzman, Step Up: Miami Heat) and his crew The Mob. A year after saving their neighborhood and landing a Nike ad deal, reality has caught up with the young dancers. And so Sean soon finds himself all alone in Los Angeles, with no girlfriend, no crew and no money. The last chance is the TV show The Vortex, which offers dance crews from all over the country a long-term commitment in Las Vegas. But to win The Vortex, Sean first needs a new crew. This is where his old buddy Moose (Adam Sevani) can help him, who is still in good contact with many of his former fellow dancers. The two quickly put together the LMNTRIX formation, with which they have a good chance of winning the Las Vegas gig. But in order to do so, Sean first has to get some minor friction with the attractive and strong-willed Andie West (Briana Evigan) under control. And indeed LMNTRIX make it into the show and soon have victory in sight. But the competition is fierce and suspicions harden that all is not right here. So is the dream of a great dance career actually long gone?

A prize for originality will probably never get the Step Up movies. All previous installments of the successful dance franchise have followed a very similar pattern. And Step Up: All in, now the fifth film, is no exception. There is hardly a viewer who doesn't know after five minutes exactly how the story will go and what the finale will look like. But there should be hardly anyone who expects the big surprises in part 5 after four very similar films. Fans of the series are mainly interested in the dance sequences anyway, and they don't disappoint in the fifth rehash. Admittedly, the big wow effect, which could be achieved in the last part at least in places, is missing. But all in all the choreographies have a very high show value and testify to the great talent of all involved.

That this is missing on the acting level is also not new. This is further emphasized by the fact that the characters are already drawn very one-dimensional in the script. Sean, for example, is a drama queen bathing in self-pity, especially at the beginning. Moose, the great sympathizer of the series, has hardly developed over the course of the films and even Andie, known from part 2, is a walking cliché as a tough dancer with a heart of gold. This wouldn't be a bad thing if the production as a whole had a bit more charm. But after a rather humorous and promising beginning, director Trish Sie follows the set pattern too rigidly for Step Up: All in to leave any lasting impression.

However, even if all these criticisms are absolutely justified, the most important question is whether the film will satisfy fans. And here the answer has to be an unequivocal yes. Because apart from the respectable dance sequences and the obligatory romance the fifth part scores with the fact that it lets numerous actors from the first four films appear again and presents so to speak a best of the series. While some actors who have since made it to a decent career outside of the franchise, such as Channing Tatum (Part 1) or Sharni Vinson (Part 3), are missing, many of the fan-favorite characters such as Moose (Parts 2 - 4) and Camille (Parts 1 and 3) are back here. This not only provides some connection between the otherwise loosely related films. For those viewers who have already loved the previous parts, the fifth film thus also becomes a reunion with beloved characters, which makes any lack of originality easily forgotten.

Objectively, then, Step Up: All in may not really be a good film. But for the target audience, for which the 3D dance spectacle is designed, the whole thing is a thoroughly successful sequel, which may be a little boring dramaturgically, but in terms of dance battles and dance choreography again offers first-class material. And for this there is then also under the stroke a proper: Worth seeing!